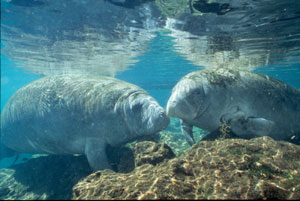 They live in the sea, are on the World Wildlife Fund’s “Endangered Species List”, and frequent the waters around Costa Rica’s Caribbean coast Tortuguero National Park. Their lives, though on similar paths, are a bit conflicted.

I’m talking about sea turtles and manatees. One draws crowds of up to 50,000 tourists each year; the other lives a hidden life and was thought until recently to be extinct.

Tortuguero is one of Costa Rica’s most popular ecotourism destinations – a microcosm of rainforest, freshwater and marine biology. This untamed stretch of Caribbean Coast is connected to Limon, the region’s only port city 50 miles (80 km) to the south, by a series of rivers and canals that parallel the sea. It is a special and widely varied ecosystem web of marshy islands, beaches, canals, lagoons and dense rainforest that is habitat for a multitude of animal and plant life. A trip through the serpentine maze of canals is likened to cruising on the Amazon, albeit on a much smaller scale.

resembling more a pale cousin to the walrus (minus the tusks) than a mermaid from old sailors’ lore, the West Indian Manatee lives a near-secret life in secluded canals of Costa Rica’s Tortuguero National Park.

The world’s fragile West Indian Manatee population is endangered and was thought to be extinct in Costa Rica until a small group was located in remote lagoons within the Tortuguero National Park. The gentle marine mammals live in warm tropical waters that once ranged from the Southern United States down the Caribbean to Brazil. Today, only a few small populations remain in isolated pockets around Florida and Central America’s Caribbean waterways. The re-emergence (or rediscovery) of a manatee population is very significant, states the Save the Manatee Foundation.

“Tortuguero’s manatees, which were considered locally extinct less than two decades ago, have made a remarkable recovery, but we still do not know whether or not there is a viable population,” reports the Save the Manatee Foundation, which is dedicated to protecting Costa Rica’s remaining population of manatees around Tortuguero. Estimates show perhaps 100 manatees inhabiting the lagoons of Tortuguero and Barra del Colorado.

The large, pale grey or brown marine mammals measure about 3.65m (12 ft.), weighing up to 800 kg (2,000 lbs) and are herbivores, eating only sea grasses. Their large snouts and sensitive mouth whiskers give them a walrus-like resemblance, though scientists say they are more closely related to elephants. They have flexible front limbs which they use to steer while swimming and to push food into their mouths, or to hold them up on sandy bottoms, and a large paddle-shaped tail that pushes them through the water at 1-3 km (3-5 mi) per hour.

Manatees have a voracious appetite, which helps to keep them warm; they eat up to 10 times their body weight each day – about 40kg (100 lbs) of plants. Being mammals, they breathe air and must rise to the surface every 15 minutes or so to breathe, more often when active. The animals are solitary, coming together only during mating season and for the first two years of a calf’s life when it stays with its mother.

In the past, manatees were hunted for their flesh to eat and for their very tough hides. But in more recent decades, the greatest threat has been chemicals and sediments washing into Tortuguero’s waterways from banana plantations. Although manatees have returned to the area, they are being squeezed between steadily expanding agriculture and increased human traffic. Ironically, the boom in ecotourism is taking a toll with escalating boat traffic. Fast motor launches full of tourists heading to the beaches and eco-lodges of Tortuguero race through the lagoons and rivers, and collide with slow-moving manatees or scare them away. Manatees have moved west in Tortuguero toward more remote lagoons, seeking quiet places to mate and are rarely seen, making it difficult to study and research the unusual creatures. Taking a tour of the canals by kayak is your best bet for trying to spot the elusive manatees.

The Tortuguero coast of Costa Rica’s northern Caribbean region is a 22-mile-long,

desolate, volcanic black sand beach littered with driftwood and tree logs tossed up on shore from wild ocean storms. There is nothing but beach and low, swampy jungle for miles and miles. You can’t swim here because of rough surf, strong currents and sharks that will eat you – adding to the isolation.

That’s just perfect for the Green Sea Turtles and Leatherback, Hawksbill and Loggerhead sea turtles that have been coming here since at least 1592, according to scientific records, to nest and hatch their young in Tortuguero’s extreme solitude.

The name “Tortuguero” means “turtle catcher” in Spanish, and the turtle population came perilously close to extinction in the 1960s when nearly every female turtle arriving to lay its eggs was killed for turtle soup. The Caribbean Conservation Corporation, now known as the Sea Turtle Conservancy, put a stop to that after renowned sea turtle expert and ecologist Dr. Archie Carr founded it in 1959 to study and protect the Caribbean sea turtles. The Tortuguero National Park was created in 1970 and preserves more than 46,900 acres (19,000 hectares), along with the 22 miles of nesting beach, making it one of the largest remaining lowland wet tropical forests in the country.

It is one of the most visited sites during turtle nesting and hatching season. Some 50,000 tourists show up annually. From July to October, the Green Sea Turtles arrive en masse to nest. March to July brings the giant Leatherback Sea Turtles and Hawksbill turtles nest from May to November. Only female turtles come ashore to nest, usually under the protection of night when it is cooler, mysteriously returning to the exact beach where they were born.

During these months, thousands of huge female turtles crawl their way up the beach to dig their nests, lay their soft, golf ball-size eggs, and return to the ocean. In 2010, there were 180,310 Green Sea Turtle nests, the highest year on record, equating to a nesting population of 30,000 to 60,000 female turtles, according to the Florida-based Sea Turtle Conservancy.

Incubation takes about 60 days, and then hundreds of tiny four-inch-long sea turtle babies hatch all together and race to the sea. Some nights, the beaches are swarming with sea turtles. It’s an exciting time.

They’re like little windup toys with their little flippers paddling away to cross the sand out into the surf. Visitors are able to respectfully witness the “circle of life” on guided tours; no one is allowed on the beaches unaccompanied after 6:00 pm to prevent poaching.

Sea turtles grow slowly, taking about 15-50 years to reach maturity, depending on the species. It is theorized that some species can live over 100 years, though there is no way to determine the age of a sea turtle from its physical appearance. What scientists do know is that turtles have been swimming Earth’s waters for a long time – the earliest known sea turtle fossils are about 150 million years old. However, the Se

a Turtle Conservancy reports that only in the past 100 or so years, the world’s sea turtle population has dwindled dramatically as humans have killed them for their meat, eggs, skin and colorful shells. Destruction of areas where the turtles feed and nest, and pollution of the world’s oceans, are all taking a serious toll on remaining sea turtle populations, notes the Sea Turtle Conservancy.

Ecotourism has helped Tortuguero preserve its natural resources and culture by providing employment to former turtle hunters who now guide tourists to the turtle nesting beaches. Costa Rica’s West Indian Manatees are another potential ecotourism draw that can elevate their protected status like the sea turtles, along with creating additional jobs and needed revenue for the community. Protecting the manatees’ waterways from encroachment by banana plantations and road construction will not only protect the environment but also will help keep Tortuguero’s unique features – its isolation and distinctive ecosystem – intact.