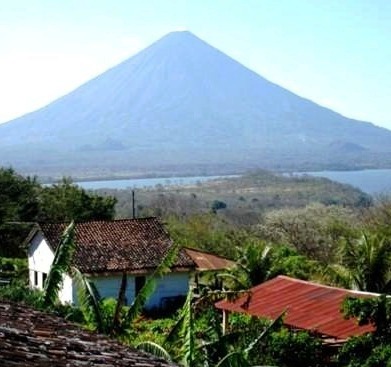 Just across the border, to Costa Rica’s north, lies the enchanting country of Nicaragua. The “Land of Lakes and Volcanoes,” as it is called, is easily reached by day trip or a longer weekend journey from Costa Rica.

The civil war ended more than 20 years ago, and today, Nicaragua is one of the safest countries in Central America. The bi-coastal country boasts the oldest city in Central America, a lake so vast it is called the “Sweet Sea,” and a rich and colorful history.

There is gorgeous colonial Granada, the most photogenic of Nicaragua’s cities, nestled on the shores of mighty Lake Nicaragua. Thick-walled adobe buildings and colonial porticos in rich tropical colors are set against red clay tile roofs. Beautiful courtyards hide behind carved wooden doors. Volcano Mombacho towers above. Founded in 1524 by Spanish explorer Francisco Fernandez de Cordoba, Granada is the oldest city in Central America. Constructed as a showcase for Spanish beauty, in present day it is a lively foreign scene with hotels, restaurants, bars, shops and art galleries.

Just next door to Granada is the “City of Flowers” – Masaya. The town is a center of art, culture and indigenous handicrafts by the native Chorotegas. It is best known for its excellent shopping at the Gothic-style old Spanish fortress that now holds the Artisan Market (Mercadeo Artesanias). A block long, the market is filled with the best indigenous crafts you can find. Masaya is also known for its volcano and national park by the same name, famous because you can drive all the way to the rim of this mammoth crater.

Northwest is Managua, capital city of Nicaragua, urban and bustling with a volcanic skyline. The city sits on Lake Managua with Volcano Momotombo keeping watch. Even further northwest is the culturally proud city of Leon. Founded only 2 months after Granada in 1524 and formally named “Santiago de Leon de los Caballeros” (St. James of the Knights), Leon parades a magnificent collection of churches and museums, art collections, thriving universities and historic sites.

To the south in Lake Nicaragua, rests the large, hourglass-shaped Island of Ometepe (Isla de Ometepe) with its twin perfect cone volcanoes, Concepcion and Maderas. Primary forests trade off with organic farms on the volcanoes’ slopes that teem with wildlife and archaeological treasures. The rustic island is definitely worth an overnight visit.

And just across the border from Costa Rica, only 30 minutes from the crossing at Penas Blancas, is the little beach and fishing village of San Juan del Sur. Internationally known for its sur

f breaks, it enjoys the same sunny dry weather as Costa Rica’s “Gold Coast” beaches of Guanacaste. Very laid back in style, San Juan del Sur is an enchanting mix of mostly one-story pastel candy-colored adobe buildings. A taxi might even be a horse-drawn cart! Relax into a slower pace, and enjoy freshly-caught grilled fish, rice and beans, washed down with a cold Tona beer.

Trans Mira Tours’ fleet of 5 different buses, from 1-8 passenger mini-vans to 54-passenger first-class tour buses, can take you all over Costa Rica and to Nicaragua. Their friendly drivers are bilingual in Spanish-English and they give you free bottled water on board. They offer special assistance for pregnant and handicapped passengers, and all kinds of extras like cold face towels, soft drinks, snacks and box lunches, souvenir gifts for groups, airport assistance and tour guides. An added plus is that Trans Mira Tours is recognized and honored as a “Carbon Neutral Company” by the Costa Rica National University – one of only a few in the nation’s transportation industry.