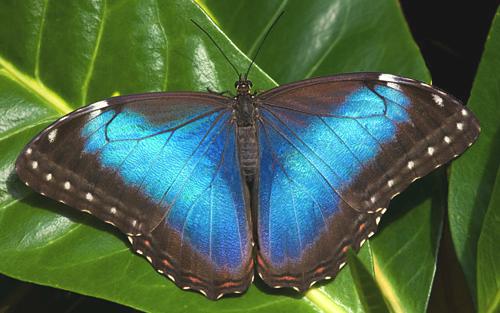 Butterfly species in Costa Rica are more plentiful than in all of North America. Be amazed by incredible rainforest life in the Butterfly Garden at Veragua Rainforest in Costa Rica.

They bring life to rainforests, both with their brilliant colors and the magnificent flowers they help pollinate.

Butterflies are one of the more plentiful species of wildlife in Costa Rica. Approximately 17,500 species of butterflies exist in the world, according to the Smithsonian Institute. Of those, there are about 1,251 butterfly types in Costa Rica and at least 8,000 moths.

Not only is Costa Rica home to remarkable biodiversity, new species are discovered all the time in the Central American nation.

And after not being seen in Costa Rica for 98 years, the nocturnal butterfly Tetrisia florigera was spotted in Veragua Rainforest in July 2009. A female specimen of the very rare butterfly was caught by chance at Veragua in a butterfly trap by scientists studying fruit-eating diurnal butterflies. Costa Rica’s National Institute of Biodiversity (INBio) reported that the Tetrisia florigera butterfly had last been seen in 1911 in San José by entomologist William Schaus.

Veragua Rainforest operates a private reserve, tourism eco-adventure park, and a scientific research station that partners with the University of Costa Rica Biology School. The 3,400-acre private reserve is a hotspot of “incredible biodiversity” with “outstanding species richness”, according to Harvard University. To date, 11 new rainforest species have been discovered at Veragua by their scientists.

You can go butterfly spotting in Costa Rica at Veragua Rainforest’s Butterfly Garden, which is inhabited by hundreds of colorful butterflies, including the bright Blue Morpho.  Veragua Rainforest tours let you visit the immense butterfly garden, plus visit their research lab where staff scientists study these vivid flying insects and other Costa Rica wildlife. Additional attractions include reptile and amphibian habitats, bird watching, walking trails through the rainforest, a river and waterfall, an aerial tramway, a canopy zip line tour, restaurant, and souvenir shop.

The Veragua Rainforest Eco-Adventure Park is located about an hour inland from Costa Rica’s Caribbean Port of Limón.

Some of the butterfly types in Costa Rica you may see at Veragua Rainforest: