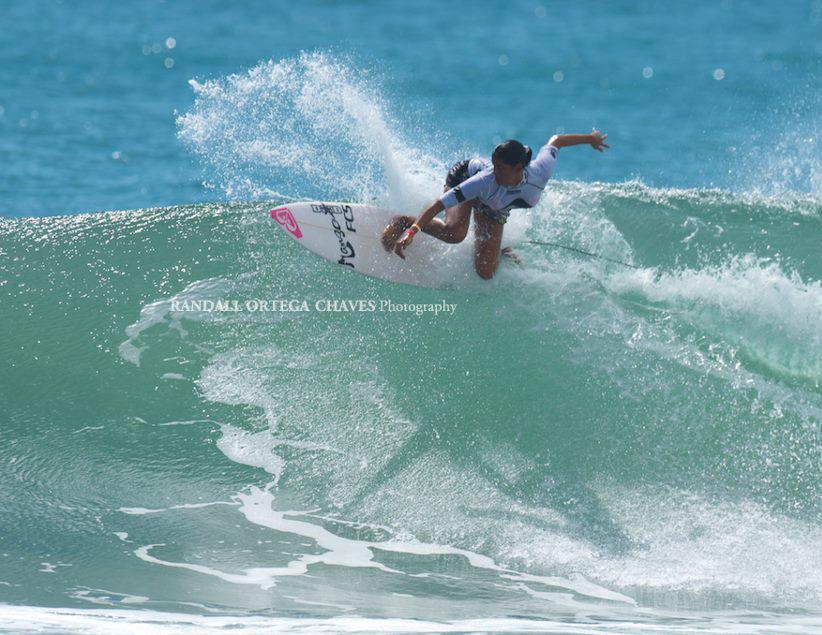 It’s been a good year so far for Nataly Bernold. The 19-year-old from Jaco Beach, Costa Rica, was just crowned Costa Rica’s National Surfing Champion in the Women’s division in August (2012), making it her third national surfing title.

In May, she won the Quicksilver Cup on the Olympus National Surfing Circuit in Dominical, placing more than 8 points higher than her second-place competitor in the Women’s Open division. And Nataly is already ranking Central American Women’s Surf Champion.

Not bad considering the teen only began surfing 9 years ago at age 10. She started competing, then winning, and hasn’t looked back. Over a few short years, Nataly has been steadily racking up gold medals – 3 Costa Rica national championships, 3 Central American championships, and winning several other national surfing competitions. She’s been chosen to be on the Costa Rica National Surfing Team on 10 occasions. On the world scene, Nataly placed 6th at the ISA World Championships, Women’s Open division, in Portugal in 2008. Her international sponsor Roxy said of Nataly at the time, “She is an amazing athlete and we feel proud to have her under our wing.”

Nataly remembers the Portugal competition fondly. She said the waves weren’t that different from what she surfs every day in Costa Rica, being a beach break, but “the cold water was a little difficult.”

The promising surfer said she’s always played in the ocean. “We lived in front of the beach in Puerto Viejo (on Costa Rica’s Caribbean coast). There was our house, then the street, and the beach,” Nataly reminisced. She said her father, who is originally from Switzerland and moved to Costa Rica 20 years ago, has been her greatest influence and inspiration for surfing. He traded windsurfing for wave surfing and taught Nataly from an early age. “He always took me in the ocean from when I was very little,” said Nataly. “I was always in the ocean on boogie boards and then surfing.”

The family moved from Puerto Viejo to Jaco Beach on the Central Pacific Coast five years ago, enabling Nataly to train in one of Costa Rica’s surf paradises between Jaco and Hermosa beaches. She is currently a Costa Rican National Surf Team member and is sponsored by Roxy, Mango Surf, FCS fins, and Wooster surf boards. With her long black tresses, wide smile and surf-carved physique, Nataly could easily also be sponsored as a fashion model.

It helps to love what you do and Nataly certainly has a great outlook. “It’s beautiful and tranquil to be in the ocean and the waves,” says Nataly, who trains 2-3 hours daily. “I like the tranquility that you feel in the ocean. I’m only thinking about surfing. When I compete, I’m always relaxed because when I stress I don’t do well. It’s better to just have fun.”

Besides being a mermaid, Nataly just finished high school and is planning to attend university to study business administration starting next school year in Costa Rica (in February). Her goals are to compete in a world surfing competition in 2013 and become a professional surfer.

Nataly’s advice for other teens and kids who are just starting out surfing or who want to learn to surf? “Be passionate. Relax. Don’t worry about competing. Just have fun, that’s the main goal,” says the Costa Rica champion.

Get your start surfing with Del Mar Surfing Academy, a surf camp exclusively for teens and kids on Costa Rica’s Central Pacific Coast, at Hermosa Beach where Nataly trains. Del Mar Surfing Academy offers 7-night and 14-night surf camp vacations, plus grad trips, day surf camps and private surf lessons. Teens have their own groups, separate from the kids’ groups; surf instruction is tailored for both beginner and advanced surfers.

On one of the prettiest tropical beaches in Costa Rica, you’ll learn and improve your surf skills, learn Spanish, and get to return home with new friends from all over the world. Check for 2012 and 2013 surf programs here.

Del Mar Surfing Academy is the sister company of long-ru

Take a tip from champion teen surfer Nataly Bernold: Go for your passion, jump in and have fun!