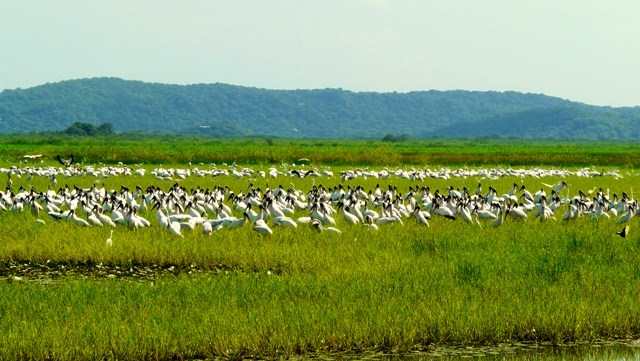 Costa Rica is such as small country in size, but very big and rich in nature, fact that has been proved and experienced by nature lovers from over the world, over and over again. The large range of species of both flora and fauna, gives the real essence and charm to this beautiful country. If we take a look at a specific group, it is very easy to realize how diverse and wide Costa Rica´s biodiversity is.

Birds are a good example; this group is very rich and varied, with around 850 species, the country housed one-tenth of world´s total, an almost unbelievable number taking into consideration the size of the country. Most of them are residents; however some migrate from other areas during the winter, trying to find safety and good live conditions, characteristics present in the protected areas around the country.

In Costa Rica, the birds can be found by four zones, each of them with specific conditions and species:

Specifically in the Northern Pacific Lowlands, the estuaries, swamps, and lagoons that make up the Tempisque Basin support the richest freshwater avifauna in Central America, and Palo Verde National Park, at the mouth of the Tempisque, is a birdwatcher’s paradise.

There is a huge number of species living on this area because of the conditions they get. To name a few examples, birds like cormorants, different species of hawks, herons and roseate spoonbills, among others. Also some species of ibis, recognizable by their long, slender, down-turned bills handy for probing muddy watercourses. Nicoya and Guanacaste are good places to spot the white ibis, with its red bill and legs. Besides, lots of species of seabirds and shorebirds, for example the gulls, being the most common the laughing gull. And don´t forget the most exotic aquatic bird in Guanacaste: the Jaribú.

Rancho Humo Protected Reserve is located near Tempisque river area and Palo Verde National Park, offering amazing sceneries of wildlife, nature and close views of the birds, featuring the unique characteristics of the Northern Pacific Lowlands and at the same time housing and preserving important ecosystems for the world.

Costa Rica´s biodiversity in terms of birds is very wide. The Tempisque river basin and Palo Verde National and its surroundings are important keys to preserve and look after the big number of birds living and surviving in the area.