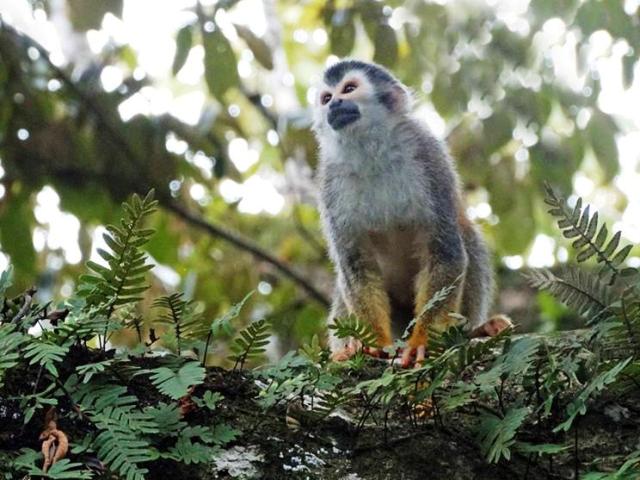 Cute, clever, playful and tiny, the Grey Crowned Central American Squirrel Monkey (Saimiri oerstedii citrinellus) known as the Mono Titi in Spanish, is the smallest primate in Costa Rica. Measuring only 9.8 to 14 inches in height and weighing 1.7 to 2.4 pounds, these little monkeys are sadly threatened with extinction due to loss of habitat from human development.

There are five squirrel monkey species in Central and South America. In Costa Rica, the Grey Crowned Central American Squirrel Monkey can be found only in small pockets along the Central and Southern Pacific Coast. Once listed as Critically Endangered by the IUCN Red List, this species of squirrel monkey “improved” its status to Endangered in 2008, due in part to efforts by the Titi Conservation Alliance in Manuel Antonio, Costa Rica. 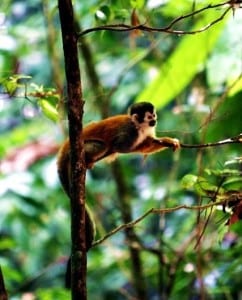 Concerned residents and tourism business owners in the Manuel Antonio/Quepos area of the Central Pacific formed the Titi Conservation Alliance in 2001 to protect the endangered squirrel monkeys and restore their dwindling habitat. They decided to take a stand when they saw how the intensely rapid development around the Manuel Antonio National Park was adversely affecting the monkeys.

Squirrel monkeys spend 99% of their lives in trees, living in large groups called “troops”. When they are unable to roam freely and intermingle among other troops, they are forced to breed within their own small group which results in genetic disabilities and the monkeys’ demise. Titi Conservation Alliance has involved local schools and businesses to work with property-owners along the Naranjo River basin to create a biological corridor into the Manuel Antonio National Park to connect populations of monkeys. They so far have planted more than 35,000 indigenous trees that the omnivorous monkeys use for food, and plan to add another 10,000 trees to expand the corridor. 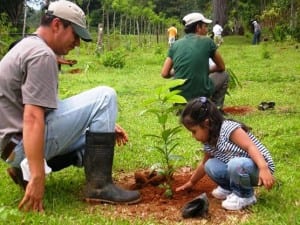 “We restore the biological corridors and we work a lot with the schools to educate the primary schoolchildren and high school students in Quepos and Manuel Antonio about the importance of conservation, wildlife and water,” commented Guillermo Piedra Gonzalez, board member for the Titi Conservation Alliance.

Piedra is CEO of the local sustainable residential community Portasol Rainforest & Ocean View Living, in the coastal mountains between Manuel Antonio National Park and Dominical, which protects 1,300 acres of rainforest that connect into area biological corridors.