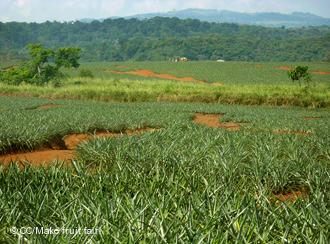 Evidence shows that Costa Rica’s 17-year-old deforestation ban on cutting “mature” forests may actually be working, according to a study published recently in the journal Environmental Research Letters.

In Costa Rica’s northern Caribbean lowlands, in an area where pineapple production tripled over the past decade, a study led by Matthew Fagan of Columbia University found that the annual loss rate of old-growth forest dropped 40 percent despite the region’s agricultural boom. Researchers used satellite imagery to determine whether deforestation has been happening to make way for pasture and cropland in the area since the 1996 law was enacted.

“We observed that following the ban, mature forest loss decreased from 2.2% to 1.2% per year, and the proportion of pineapple and other export-oriented cropland derived from mature forest declined from 16.4% to 1.9%,” the researchers wrote. “The post-ban expansion of pineapples and other crops largely replaced pasture, exotic and native tree plantations, and secondary forests.”

What appears to be happening is that the primary industrial agricultural crops in the region – pineapples and bananas – have shifted to taking over pastureland and non-protected green areas. Mature forests are being protected for the most part; however, there is still not an ecological solution to the agriculture vs. rainforest issue.

The researchers note that intensive agriculture has taken over important non-protected forests, including wetlands and secondary forests, and that their use of agricultural chemicals puts animals and aquatic habitats at risk. Additionally, they observe that these monocultures offer fewer habitats for wildlife than, for instance, a typical cattle pasture, which usually includes scattered tree cover that can be used by many species. A pineapple farm, on the other hand, is usually devoid of trees and in effect is a biological desert.

“Pineapple and banana production in Costa Rica depends on extremely high applications of fertilizer and toxic pesticides,” the study’s authors write. “In Costa Rica these agro-chemicals have degraded water quality and disrupted downstream ecosystems, and contaminated forests with pesticides.”

Pineapple-producing companies could perhaps learn a lesson from Costa Rica’s coffee farmers, who have found that the more trees their farms have, the more birds live in the area and help reduce pest infestations. According to a study reported in the Nature Journal, insect-eating birds reduced damage from a devastating coffee pest, the coffee berry borer beetle (Hypothenemus hampei), by about half. The African borer beetle is invulnerable to most pesticides, and can cost farmers up to 75% of their crop.

“Based on this study, we know that native wildlife can provide you with a pretty significant benefit,” states Daniel Karp, a conservation biologist at Stanford University in California, who led the study. “Incorporating their conservation into your management of pests is absolutely something you should do.”

Deforestation and forest degradation, through agricultural expansion, conversion to pastureland, development, destructive logging, fires, etc., account for nearly 20% of global greenhouse gas emissions. That is more than all of the transportation on the planet, and second only to the energy sector, according to the United Nations Collaborative Program on Reducing Emissions from Deforestation and Forest Degradation in Developing Countries (UN-REDD).

Luckily for Costa Rica, the big business of ecotourism has become an important revenue source and is pushing reforestation and greater environmental protection measures.

An exemplary conservation project in Costa Rica’s Caribbean mountains is Veragua Rainforest Research & Adventure Park. “We’re a perfect example of an ecotourism project,” says Veragua owner Marti Jimenez. “We’re located in a poor area that traditionally was involved in logging, mono-agriculture and hunting. We’re turning the region into a conservation-focused area, giving locals jobs and teaching them to protect their resources.”

Veragua Rainforest is a 1,300-hectare (3,212-acre) biology research center and adventure park, located about an hour inland from the historic Caribbean port town of Limon. It is an area of breathtaking tropical rainforest next to the Talamanca Mountain Range and the La Amistad (“Friendship”) International Park. Visitors have a complete Costa Rica rainforest experience in a one-day tour at Veragua. The park is a principal day tour for cruise line passengers docking in Limón. Attractions include wildlife exhibits and science labs, an aerial tram, canopy zipline tour, hiking trails, a river with waterfalls, and of course, the rainforest.