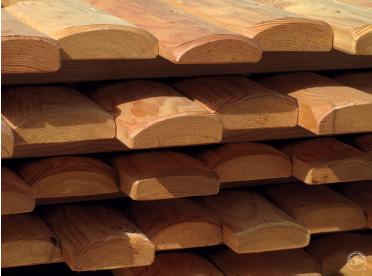 My front door is starting to stick. The kitchen cupboards under the sink now won’t close, and my bedroom door is suddenly dragging across the floor tile. Is my house in need of repair? No, it’s just rainy season in Costa Rica.

In the tropics, water and humidity play a major role in daily life. For us in Costa Rica, rain affects everything from drinking water supply to growing food, maintaining our forests and vegetation, and our electricity generated by hydroelectric power. Not quite so obvious, but which definitely affects daily life, is the swelling and shrinking of wood based on moisture levels. During the rainy season in Costa Rica, sometimes doors suddenly won’t open without force, cupboards don’t close, tables warp – all due to the wood’s absorption of moisture in the air and expansion. Researchers at the University of Costa Rica are coming to the rescue with “super woods.”

Super Wood, or acetylated wood technology, is a process that has been studied by scientists around the world for more than 75 years. Accsys Technologies in England are experts with their Accoya wood technology. The process literally alters the wood’s chemical structure to create a new product which is “pure, natural and more durable,” states Accoya information.

Wood contains an abundance of chemical groups called “free hydroxyls” which absorb and release water depending on climatic conditions, explains the Accoya website. This is the main reason why wood swells and shrinks. Digestion of wood by enzymes begins also at the free hydroxyl groups – one of the principal reasons why wood is prone to insect infestations and decay.

Acetylation effectively changes the free hydroxyls within the wood into acetyl groups by treating the wood with acetic anhydride, which comes from acetic acid (the primary acid in vinegar), explains the Accoya information. When the free hydroxyl group is transformed to an acetyl group, the wood becomes extremely durable because it no longer absorbs water as much and is no longer digestible.

The best part is that acetyl groups are simply composed of oxygen, hydrogen and carbon – elements already naturally present in all wood, as well as in humans and other animals. This means that the manufacturing process adds nothing to the wood that does not already naturally occur within it and does not add toxins to the environment, states Accsys Technologies.

In Costa Rica, the “natural” acetylation process is good news as the country works hard to maintain and improve its leading world environmental status. The experimentation being conducted by UCR researchers could change the way wood is processed in Costa Rica. “In the majority of sawmills in the country, what they do now is put the wood in a pile with a chemical made from water, which also contains gold and chromium salts. Both components are toxic to pests and also have some toxicity to humans,” said UCR researcher Johnny Alfaro.

Veragua Rainforest protects 1,300 hectares (3,212 acres) of tropical rainforest in the foothills of the Talamanca Mountain Range in Costa Rica, an hour inland from the port town of Limón on the Caribbean Coast. The biology research center and adventure tours park offers an excellent educational opportunity, both for students and educators and also day-tour guests, with hands-on research of rainforest life. The property contains a biology research station, wildlife habitats, walking trails through the rainforest, a river and waterfall, an aerial tramway, a canopy zip line tour, student group accommodations, and a restaurant, café and souvenir shop.

Veragua Rainforest Research & Adventure Park is a sustainable rainforest experience not to be missed when visiting Costa Rica’s Caribbean area. Veragua Rainforest is open to day visitors Tuesday to Sunday, from 8:00 am to 3:00 pm. Admission is $66 for adults and $55 for children/students; children under age 4 receive free admission. Veragua is located 40 minutes from Limon and 2 ½ hours from San José, in Brisas de Veragua, 12 km south from the Liverpool entrance on the highway to Limón.