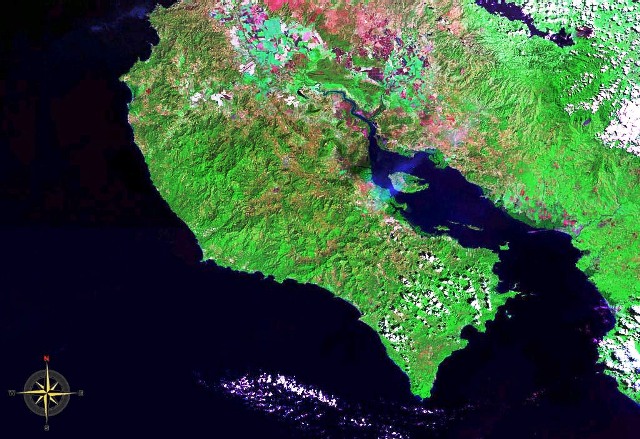 About 50 million years or so ago, Costa Rica was a series of underwater volcanoes. Over thousands and thousands of years, layers built up until eventually they surfaced and continued to grow, just as the Hawaiian Islands do today. The Cocos Plate shoving its way underneath the Caribbean Plate also helped things along, pushing Central America out of the sea floor. Eventually, a recent 3 million years ago, Costa Rica emerged from the sea creating a continuous bridge between North and South America.

Today, the Cocos Plate is still pushing its way below the Caribbean Plate in what is considered a subduction megathrust fault, and it is happening directly below Costa Rica’s Nicoya Peninsula along the Pacific Coast. The Nicoya Peninsula has the unique distinction of being “one of the few landmasses along the Pacific Rim located directly above the seismogenic zone of a subduction megathrust fault,” states Dr. Jeff Marshall of California State Polytechnic University, Pomona.

So, what does all of this mean?

In geology, subduction is the process that takes place at the point two tectonic plates converge, when one tectonic plate moves under another and sinks into the Earth’s mantle, explains Wikipedia. A subduction zone is an area where this is happening. According to Marshall, megathrust earthquakes along subduction zones are among Earth’s most powerful natural hazards.

Off the Nicoya Peninsula, the Cocos Plate is subducting along the Middle America Trench under the Caribbean Plate at a rate of about 9 cm per year. The Middle America Trench is a deep oceanic trench stretching along the Pacific Coast from central Mexico to Costa Rica. The trench is 1,700 miles (2,750 km) long and is 21,880 feet (6,669 m) at its deepest point, according to Wikipedia.

Marshall and other scientists are studying the situation along Costa Rica’s Nicoya coast, because due to its proximity to the subduction trench, the Nicoya Peninsula is particularly sensitive to vertical movements related to earthquakes. The subduction rate is considered “rapid,” reports Marshall, resulting in a high seismic potential, as demonstrated by multiple large magnitude earthquakes during the past few centuries.

A major earthquake centered beneath the Nicoya Peninsula occurred on October 5, 1950 with a magnitude of 7.7, and just last year on September 5 (2012), a major megathrust earthquake (7.6) ruptured the plate boundary under the Peninsula. Located 12 km offshore of the central Nicoya coast, at a depth of 18 km, thankfully there were few casualties (2 deaths, 200 injured) in the September quake due to prior public outreach by geoscientists and Costa Rican government officials. The population was prepared and emergency personnel reacted swiftly.

Therefore, it is critical that geoscientists, government officials, and local residents develop a better understanding of the megathrust earthquake cycle beneath the Nicoya Peninsula, Marshall advises.

Where to stay on the Nicoya Peninsula?

Once a small fishing village, Santa Teresa near the southern tip of the Nicoya Peninsula is a tropical paradise. The jungle at Santa Teresa sweeps down low coastal mountains to the Pacific Ocean, hugging the shore and creating one of the most beautiful beaches of Costa Rica.

Hotel Tropico Latino fronts the white sands of Playa Carmen at Santa Teresa on four acres of tranquil, abundant gardens – a heavenly Costa Rica vacation destination. Hotel Tropico Latino features comfortable, luxurious beachfront and garden rooms, bungalows and suites. Hotel facilities include a full-service beachfront Spa, a beachfront yoga platform with daily classes and activities, surfing and surf instruction in front of the hotel, and regular yoga and surf retreats. The open-air beachfront Shambala Restaurant, run by award-winning Chef Randy Siles, is nationally-recognized for its creative international cuisine. It’s easy to relax there with a beachside pool and plenty of hammocks strung under a grove of coconut and almond trees; sunsets are breathtaking.

To get to Playa Santa Teresa, drive to the port of Puntarenas on Costa Rica’s Central Pacific Coast and take the ferry (1-1/2 hours) to Paquera; drive another 75 minutes, going past Tambor and Cobano to the crossroads for Mal Pais and Santa Teresa; turn right toward Santa Teresa. Arrange a shuttle ride or private van with a transportation company. Many visitors take a domestic flight to Tambor on either Nature Air or Sansa Airlines; Santa Teresa is approximately a 50-minute drive from the Tambor airport. You can also take a taxi boat from the Central Pacific beach town of Jacó that departs daily at 10:45 am and arrives in one hour to Montezuma at the tip of the Nicoya Peninsula; from there it is a 35-minute drive to Santa Teresa.