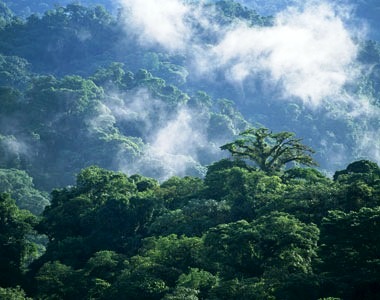 Tropical forests cover 15% of the globe’s surface and capture 25% of the carbon present in the atmosphere. These healthy forests play a critical role in curbing climate change. They “breathe” CO2 from the atmosphere and store it in trees and soil; in fact, roughly half of the world’s terrestrial carbon is stored in forests, according to the international organization Conservation International.

Costa Rica is the first, and so far the only, tropical country in the world that has reversed a decades-long process of deforestation (dropping from 85% forest in 1940 to 35% forest by 1980), Conservation International reports. It was the first country to set a goal to be carbon neutral by 2021, and by many estimates it will be the first to realize this goal. By protecting forests instead of destroying them, Costa Rica is leading the global effort to mitigate climate change, Conservation International states.

According to satellite imagery taken in 2005, Costa Rica had 2,391,000 hectares of total forest area, or about 46.8% of the land. By 2010, however, that figure was reported up to 51.02% forest, according to a World Bank report published in 2012. Approximately 25% of Costa Rica’s territory is protected in national parks and private reserves.

Costa Rica is known as a “bridge of biodiversity” because it has flora and fauna from both North and South America. Trees are usually the largest most obvious element of an ecosystem. We need to conserve and plant trees not only for the oxygen they produce and carbon they store, but also for the ecosystems they create and biodiversity they protect. Costa Rica maintains a very high percentage of biodiversity (5%) on the planet relative to its landmass size. It has more than 1,511 known species of amphibians, birds, mammals, and reptiles, 6.9% of which only exist in Costa Rica, and 12,119 vascular plants, 7.8% of which are endemic.

In April 2013, a joint research project between Canada and Costa Rica sought to measure how much carbon is stored in Costa Rica’s forests and to map the country’s major forest areas. Mission Airborne Carbon 2013 (MAC-13) employed the use of a Canadian Twin Otter plane to fly over forest sites in Guanacaste, the Northern part of Costa Rica, the Caribbean, and the Osa Peninsula in the South Pacific. The aircraft was equipped with two hyperspectral sensors (CASI y SASI), on loan from the Canadian Space Agency, that measure the solar energy reflected by a form when it hits it. This is called “radiance”, and by combining these data with the biomass, scientists learn what the potential of carbon capture and storage a forest has, according to the MAC-13 project.

The MAC-13 project, coordinated by researchers at the McGill University in Canada, is part of the United Nations Collaborative Program on Reducing Emissions from Deforestation and Forest Degradation in Developing Countries (UN-REDD). Costa Rica is a UN-REDD partner country.

Deforestation and forest degradation, through agricultural expansion, conversion to pastureland, infrastructure development, destructive logging, fires etc., account for nearly 20% of global greenhouse gas emissions, more than the entire global transportation sector and second only to the energy sector, according to the UN-REDD. “REDD is an effort to create a financial value for the carbon stored in forests, offering incentives for developing countries to reduce emissions from forested lands and invest in low-carbon paths to sustainable development,” UN-REDD information states.