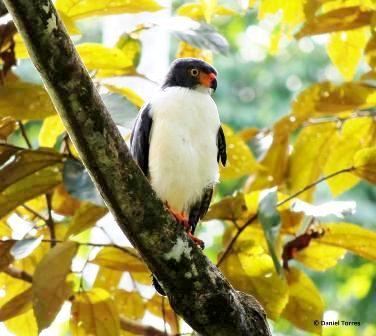 A historic  number of 417 different bird species, and 12,665 individual birds, were identified in a 24-hour period – the highest number registered in Central America for the annual bird count. Beginning at 12:00 a.m. on December 5 and finishing at midnight the same day, 67 ornithologists, naturalist guides, university students and bird enthusiasts covered 19 routes in the Central Caribbean rainforest sighting as many birds as they could find.

“Thanks to the great weather conditions and the number of participants, the count was conducted within a circle of 24 km in diameter, covering an area of 460 square miles (46,000 hectares) with a circumference of 76 km (47 miles),” reported Daniel Torres, Site Manager of Veragua Rainforest who organized the 4th annual Christmas Bird Count. “Participants traveled 126.62 km (78 miles) on foot, 25 km (15 miles) by boat and 109 km (47 miles) in vehicles, for a total of 235.5 hours of field observation, reporting 18 new species.”

Veragua Rainforest is a 1,300 hectare (3,212 acre) biology research center and adventure center, located about an hour inland from the historic Caribbean port town of Limón in Costa Rica. It is an area of breathtaking tropical rainforest in the foothills of the Talamanca Mountain Range bordering the La Amistad (“Friendship”) International Park, the country’s largest and most remote national park that is shared by both Costa Rica and Panama.

Every year at Christmastime, birding devotees throughout the Americas – both professional and amateur – outfit themselves with binoculars, bird guides and checklists, and brave snow, wind, rain or tropical sun (as in the case of Costa Rica) to count birds. The National Audubon Society of the USA leads the bird count; they and other organizations use the data collected to assess the health of bird populations and to help guide conservation action. The 113th annual Christmas Bird Count in the United States is on from December 14, 2012 through January 5, 2013. Tens of thousands of volunteers participate in this longest-running wildlife census, making an “enormous contribution to conservation,” according to the National Audubon Society.

“For over 100 years, the desire to both make a difference and to experience the beauty of nature has driven dedicated people to leave the comfort of a warm house during the Holiday season,” states the National Audubon Society.

The Christmas Bird Count began on Christmas Day in the year 1900, creating a landmark turning point toward conservation from hunting. Before 1900, there had been a holiday tradition in the United States of going out to the countryside to capture animals of all kinds. The winner was the one who brought back the largest number of species, which were usually killed. Frank Chapman, ornithologist and officer in the then-budding Audubon Society, took action on the worry of conservationists and birders about the indiscriminate killing of wildlife and declining populations, and proposed a new tradition. Rather than hunt and kill, Chapman introduced a Christmas Bird Census. Ever since that original Christmas Day count, the tradition has grown exponentially in popularity from Canada down to Central America.

In Costa Rica, there are many different Christmas Bird Counts … from birding clubs to tourism businesses with nature preserves. Some are affiliated with the Audubon Society, and some are just for fun. Either way, the counts assist the country’s official tally of bird species recorded.

“The results of the count will provide valuable information about bird populations in general, and especially those threatened or endangered species,” said Jose Salazar, Research Coordinator of Veragua Rainforest. “We can also give a parameter of the population dynamics of birds in the Caribbean region.”

The results of Veragua Rainforest’s 4th annual Christmas Bird Count show the diversity and abundance of birds in their Central Caribbean region and in Costa Rica. The species most frequently found was Psarocolius montezuma (Montezuma Oropéndola) with 888 individuals, according to Veragua’s data. Also observed on all routes were Melanerpes pucherani (Black-cheeked Woodpeckers) and Setophaga pensylvanica (Chestnut-sided Warblers).

Veragua Rainforest Research & Adventure is a must-see attraction when visiting Costa Rica’s Caribbean area. There are walking trails through the rainforest, a river and waterfall, an aerial tram, a canopy zip line tour, a biology research station and fascinating wildlife habitats, plus a restaurant, café and souvenir shop. Veragua Rainforest Research & Adventure is open Tuesday to Sunday, from 8:00 am to 3:00 pm. Admission is $66 for adults and $55 for children/students; children under age 4 get in free. The admission price includes all activities and attractions, with the exception of the canopy tour – which is an additional fee. Veragua is located 40 minutes from Limon and 2 ½ hours from San José, in Brisas de Veragua, 12 km south from the Liverpool entrance on the highway to Limón.