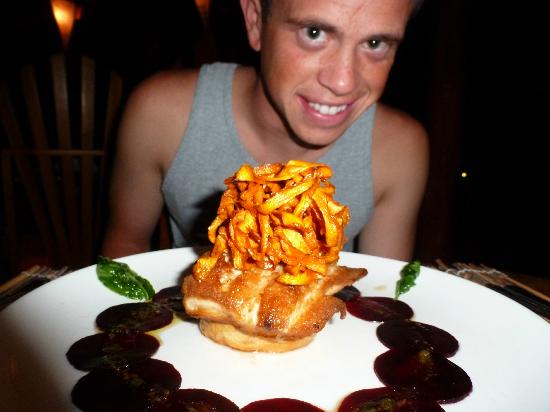 The new wildly popular “Author’s Cuisine” culinary movement that originated in Spain over a decade ago is not simply cuisine by the “author” or chef who cooked it. “Author’s Cuisine” is a vanguard of culinary arts favored by Spanish and other European chefs who are praised for their creativity. Dishes incorporate unusual textures, aromas, and flavor combinations, while stimulating the senses and pleasing the palate. Innovative and sophisticated, there are no rules and no boundaries with Author’s Cuisine. It surprises you; keeps you guessing; keeps you tasting. This is not Mac-n-cheese or arroz con pollo.

“Experience” is the operative word with this cuisine style. World-renowned chef Ferrán Adrià perfected Author’s Cuisine (“Alta Cocina” in Spanish) at his restaurant, El Bulli in Costa Brava, Spain. Adrià developed the concept of Author’s Cuisine by taking elements of traditional dishes and transforming those using techniques nobody else had used before. El Bulli was awarded three Michelin stars and was touted as one of the best restaurants in the world, before it closed on July 30, 2011. Its plan is to reopen as a culinary creativity center in 2014.

Madrid Fusión, the annual international gastronomy summit where the best chefs from around the world gather to cook and demonstrate their techniques and talents, spotlights Author’s Cuisine. On internet restaurant guides in Spain, Author’s Cuisine is its own category, like Italian or Chinese. In England, British chef Heston Blumenthal, owner of The Fat Duck, a three-Michelin-starred restaurant in Bray, Berkshire and voted Best Restaurant in the UK, is the pioneer of Author’s Cuisine.

In Siles’ kitchen, he creates original recipes using his imagination and his expertise in his favorite cuisines – Japanese, Indian, Hawaiian, Costa Rican, and classic French cooking. He’ll take a Japanese favorite of seared fresh sushi-grade tuna strips and circle them around creamy Indian babaganoush (eggplant puree), then top it off with a few crispy tempura jumbo shrimp and a soy, ginger, mint, lemongrass, honey and oyster sauce. Called “Tuna Tataki” on Shambala Restaurant’s dinner menu, the dish is an explosion in flavor. You’d never think that babaganoush would meld so well with tuna, soy and ginger, but it does. It leads you on, bite after bite, until you’re very nearly licking the plate clean … or in my case, unabashedly using my finger to scoop up the last of the ambrosial sauce.

Pique your palate with appetizers like Calamari Paella Rolls – tempura squid rolled around a bit of that famous Spanish paella rice with a dash of homemade aioli (creamy, aromatic garlic mayonnaise). Or Tuna Tartare – fresh local sushi-grade tuna served rare with avocado, papaya and applesauce. Or how about homemade black ravioli, tinted with tangy squid ink, and filled with goat cheese and duxelles of minced mushrooms, shallots and herbs sautéed in butter, topped with ginger mousse. A new dish Siles is concocting combines Mahi Mahi with macadamia, curry and lobster.

Like an artist with a blank canvas, Siles skillfully creates gourmet art fusing flavors from different cultures into new avant-garde, delicious, fresh dishes. Or, he makes a twist on traditional recipes, like his classic Crème Brûlée made with fresh blackberries – tart and sweet and wonderfully creamy.

Educated at ACAM University in Costa Rica, Siles learned the complexities of Author’s Cuisine while working with Michelin two-star chef Richard Neat at his Park Café in the San Jose neighborhood of Sabana Norte. The British chef is owner of the exquisite fine dining restaurant and antique store, a not-to-be-missed experience when visiting San Jose. Siles says he also reads a lot of books by chefs, like Roy Yamaguchi, the Japanese-American celebrity chef in Hawaii who specializes in Hawaiian fusion cuisine. Overall, though, Siles is loyal to his former mentor. “My favorite of all is Richard!” he avows.

So how does such an extraordinary chef with his remarkable culinary style end up in a quiet, dusty, provincial beach town like Santa Teresa on Costa Rica’s Nicoya Peninsula? Siles said he fell in love with the gorgeous beach and its cosmopolitan community 10 years ago on a visit. “I love it here. I am happy here. I surf and have my friends,” Siles says. “I love to cook and be happy, that’s the most important thing.”

Finishing his first year at Hotel Tropico Latino, Siles’ specialized menu at Shambala Restaurant is geared toward the hotel’s international guests and the active, healthy lifestyle that the hotel promotes with its Spa, and yoga and surf retreats and classes. Fronting Santa Teresa Beach amid four acres of abundant and peaceful gardens, Hotel Tropico Latino is a relaxed and charming oasis. The hotel features a full-service Spa, a yoga studio with daily classes and activities, surfing and surf instruction in front of the hotel, regular yoga and surf retreats. Their exquisitely-designed tropical bungalows and suites deliver relaxed, well-appointed luxury.