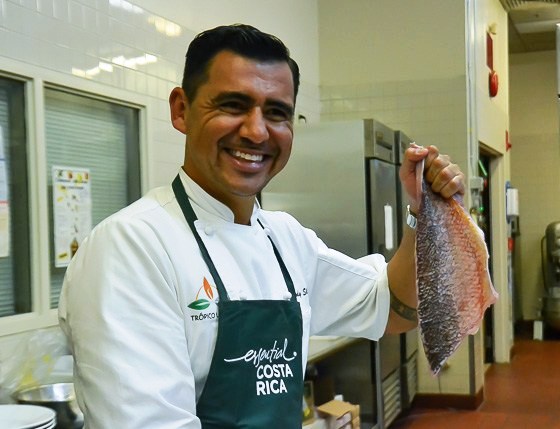 Is Costa Rica the new foodies’ travel destination? Chef Randy Siles takes the world by surprise showing off the creative diversity of Costa Rica food and travel. Find out just who is this rising star celebrity chef from Costa Rica.

Award-winning and gaining international celebrity status in his role as Costa Rica’s Ambassador of National Gastronomy, Randy Siles is loving life as a top chef in Costa Rica. He lives and works steps from one of the country’s prettiest beaches, sharing his passions of surfing with creating inventive sustainable cuisine at Hotel Tropico Latino in Santa Teresa, Costa Rica.

Yet lately, Siles is spending almost as much time on an airplane as he is in the kitchen.

As Costa Rica’s Chef Ambassador for the National Plan of Sustainable and Healthy Gastronomy, Siles has been traversing the globe giving cooking lessons at international travel shows like the New York Times Travel Show in January. Food bloggers from around the world have been invited to “Cook Like a Tico” with Siles, who surprises them with innovative Costa Rican recipes using traditional and sustainable ingredients.

At the New York Times Travel Show, Siles was showcased on The Taste of the World stage along with other internationally celebrated chefs and culinary personalities, allowing him to rub shoulders with lifelong heroes and to show off Costa Rica as a delicious culinary destination.

“It is just incredible! I never dreamed all of this would happen,” Siles remarked.

International fame aside, who is the man underneath the chef hat and how did Siles get his start as a rising star in the kitchens of Costa Rica’s gastronomic scene?

Growing up in Costa Rica’s capital city of San Jose, Siles said he first learned to cook from his mother, Elizabeth, who helped teach baking and pastry-making. Starting when he was about 8-years-old, Siles said he would climb up on a chair in their kitchen and help her make cakes.

“I was always was fascinated with cooking. When I was older and would travel around with friends, I would always cook for the group,” he remembered.

Siles received a diploma in gastronomy from the ARCAM Gourmet School in San Jose in 2007. Luck and talent led him to work for one year with two Michelin Star chef, Richard Neat, in Park Café in San Jose. “He helped me form my style and awakened my interest and talents in cooking,” said Siles of his mentor.

Then, Siles’ life changed forever when he accompanied friends to the remote beach paradise of Santa Teresa on Costa Rica’s southern Nicoya Peninsula. “I loved it. I vowed to return, and did, to work in a hotel,” he said. “I loved the lifestyle and the spectacular beauty of the place. Surfing was always a dream in my life and I moved to Santa Teresa for that.”

Now, at age 35, Siles has been chef at Hotel Tropico Latino on the beach in Santa Teresa for six years. He focuses on using fresh, locally sourced, native products in his healthy menu that compliments Tropico Latino’s active Santa Teresa surf and yoga retreats, and natural spa.

He said he is thrilled to promote Costa Rican food and travel globally. “We are rescuing recipes from our traditions and history and reinventing them with local, native products,” he said.

Specialty dishes he has created at the travel shows include fresh fish Ceviche with mango, rice pudding (arroz con leche) in crème brulee style with pineapple, picadillo of chayote with indigenous purple corn and pork, and squash and farro salad.

Why should tourists come to Costa Rica for the food? Siles says: “We have the freshest products here in Costa Rica – fish from two oceans and thousands of rivers, fresh vegetables and fruits, and fresh meats farmed locally. Our climate allows us to grow anything and everything. And we are a small country so we can easily move products from one place to another.”

When Siles is not cooking at Hotel Tropico Latino or traveling as Costa Rica’s Chef Ambassador, he loves to surf, run on the beach, and spend time with family. His daughter, Tamara, who turns 2-years-old in May, is “the light of my life,” he boasts.

Siles hopes to continue expanding his horizons and popularizing Costa Rica’s cuisine around the world, while at the same time keeping his paradise home in Santa Teresa close at heart.

He said, “I work hard and always focus on my dreams, remember where I’m from, and keep shooting for the stars.”