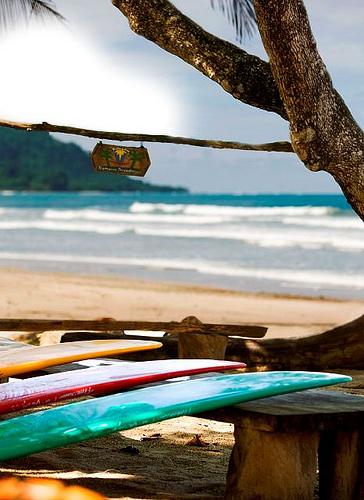 Once, Santa Teresa was a small fishing village, home to a handful of families who lived off the sea, along with small-scale agriculture and cattle ranching. Like many of Costa Rica’s top beach destinations along the Nicoya Peninsula, Santa Teresa’s isolation from poor or non-existing roads kept this tropical paradise off the beaten track for decades.

From the hilly interior, the jungle sweeps down the mountains to the Pacific Ocean, hugging the shore and creating some of the most beautiful and hidden beaches of Costa Rica.

Located about 150 kilometers (93 miles) west of the capital city of San José, across the sparkling blue Nicoya Gulf, the southern Nicoya Peninsula originally belonged to Nicaragua during the colonial period. It only became part of Costa Rica in 1825, when Central America gained independence from Spain.

The coastal area of Santa Teresa, Mal Pais and Montezuma was discovered by camping backpackers and surfers in the early 1990s and has become one of Costa Rica’s most secluded gems. Stretching over 5 kilometers (3 miles) along a winding gravel road between green forested hills and palm and almond tree-shaded beaches, Santa Teresa today is a thriving tourism destination. The top internet travel site Trip Advisor has named Santa Teresa “Best Beach in Central America” two years running in their annual Traveler’s Choice Awards. Forbes Magazine also tagged Playa Santa Teresa as one of the world’s top beaches.

Picture it … soft, cushy light sand, rhythmic deep blue waves rolling onto shore, soft breezes wafting playfully over you as you lounge in the shade of palm trees. Surfers bounce, flip and skim through the cobalt water and white froth. The warm yellow sun throws a zillion sparkles across the water.

Many travelers from around the world have fallen in love with that image. They only planned a short Costa Rica surf vacation, then fell in love and decided to stay. Cosmopolitan settlers have added their spice and style to the local flavor – a combination of cultures from places like Israel, Argentina, Italy, Spain, France, United States, Germany, and others, mixed into Costa Rica life. The Costa Ricans and immigrants who have settled in Playa Santa Teresa have grown the quiet backwater over the past 10 years into a lively little town. An eclectic melting pot of surfers, artists, hippies, spiritual seekers and celebrities, the community has built an array of exceptional international restaurants, hotels and shops.

Though Santa Teresa is now a trendy new travel destination in Costa Rica, it is still a remote place with basic infrastructure. Roads and transportation are improving slowly. Thankfully, hotels and businesses have still remained small and mostly privately owned, tucked here and there throughout the trees and beach with no high-rise buildings yet, helping to preserve both the views and the relaxed and unhurried atmosphere of the town.

However, you don’t have to be a surfer to enjoy Santa Teresa. You can explore miles of picture-perfect coastline walking to the north or south of Santa Teresa, plus tide pool exploring and snorkeling in the volcanic reef formations. And there are numerous other outdoor activities like horseback riding, canopy zip lines, fishing tours, diving and snorkeling, stand-up paddle surfing, yoga classes and retreats, and hiking in the nearby Cabo Blanco Absolute Nature Reserve. For the quintessential tropical beach wedding and honeymoon in Costa Rica, Santa Teresa is the ideal place to find both romance and privacy.

Come stay a spell in Santa Teresa and see if it calls to you to be your new home. Hotel Tropico Latino is a relaxed and charming oasis fronting Santa Teresa Beach, amid four acres of serene, abundant gardens – a heavenly Costa Rica vacation destination. Hotel Tropico Latino features a full-service beachfront Spa, a beachfront yoga platform with daily classes and activities, surfing and surf instruction in front of the hotel, and regular yoga and surf retreats. Their exquisitely-designed tropical bungalows and suites deliver relaxed, well-appointed luxury. The open-air beachfront Shambala Restaurant, run by award-winning Chef Randy Siles, is nationally-recognized for its delicious and creative international cuisine. Relax by their beachside pool or lounge in a hammock under a grove of coconut and almond trees as you watch a breathtaking sunset. Or enjoy a professional massage while you listen to the rhythm of the waves at the ocean’s edge. Hotel Tropico Latino is a Trip Advisor “Certificate of Excellence” winner.

To get to Playa Santa Teresa, drive to the port of Puntarenas on the Central Pacific Coast and take the ferry (1-1/2 hours) to Paquera; drive another 75-90 minutes, going past Tambor and Cobano to the crossroads for Mal Pais and Santa Teresa; turn right toward Santa Teresa. Direct bus connections travel regularly between San José and Santa Teresa using the ferry. Many visitors take a domestic flight to Tambor on either Nature Air or Sansa Airlines; Santa Teresa is approximately a 50-minute drive from the Tambor airport. You can also take a taxi boat from the Central Pacific beach town of Jaco that departs daily at 10:45 am and arrives in one hour to Montezuma at the tip of the Nicoya Peninsula; from there it is an hour drive to Santa Teresa.