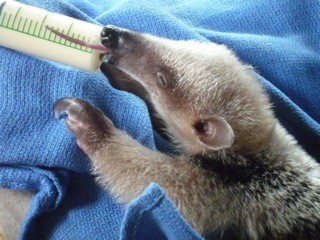 Meet sloths, kinkajous, tayras, ocelots, peccaries and anteaters. Stand next to Scarlet Macaws feeding on almond trees. Watch white-faced monkeys swing and play next to you, and have your heart melt when a spider monkey comes to hold your hand.

This isn’t some exotic zoo, but rather the Osa Wildlife Sanctuary on Golfo Dulce in the South Pacific of Costa Rica. The Costa Rica wildlife refuge helps orphaned and injured animals that are indigenous to this southern Pacific rainforest. Sadly, many of the animals are victims of illegal pet trade. Monkeys, wild cats, kinkajous, Scarlet Macaws and other prized creatures are captured as babies, and then abused or abandoned when their owners find they don’t know how to deal with a wild animal. The Osa Wildlife Sanctuary works closely with the Costa Rica Ministry of Environment and Energy (MINAE) to rescue illegally-held animals.

The sanctuary on the beautiful Golfo Dulce coast by the Piedras Blancas National Park was originally an eco-lodge started by owners Carol Patrick and Earl Crews. Carol got a reputation for tending to injured animals, and soon locals began dropping off orphaned and injured wildlife until there was no time for guests. The Osa Wildlife Sanctuary was then established in 1996.

At first primarily an avian sanctuary, after Poppy the spider monkey arrived in 2003, all sorts of wonderful critters started showing up. Carol and her staff try their best to rehabilitate animals to release back into the wild. For each animal that enters the refuge, a complex and often unconventional playground, specifically designed to mimic its natural habitat, is created for housing. Environmental enrichment features – like species-appropriate toys, imitation streams with cascading water, and tree branches –encourage natural behaviors and prevent boredom.

The Osa Wildlife Sanctuary is a non-profit organization and relies on donations and tour fees to help with expenses like food, staffing, veterinary medical care, and supplies. Guided tours for visitors cost $25 per person and reservations must be made in advance.

The animal refuge is a popular eco-tour for guests at Playa Nicuesa Rainforest Lodge, just 10 minutes away by boat down the Golfo Dulce coast. Playa Nicuesa Rainforest Lodge is an environmentally sensitive eco-lodge set on a 165-acre private preserve. The award-winning eco-lodge caters to travelers interested in ecotourism, nature and adventure. They offer family vacations, honeymoon trips, nature and adventure vacations, and yoga classes and retreats.