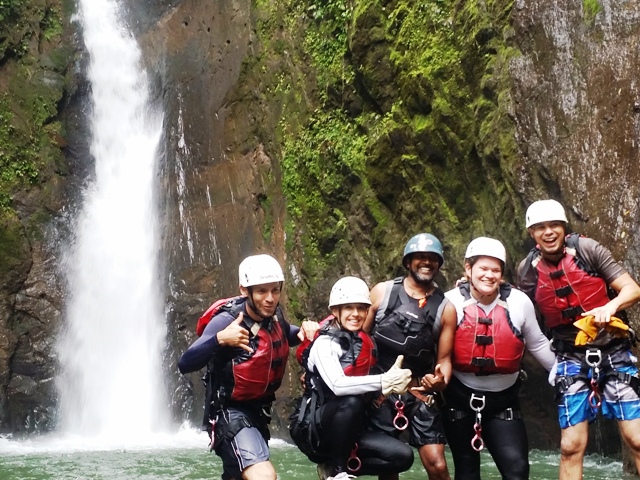 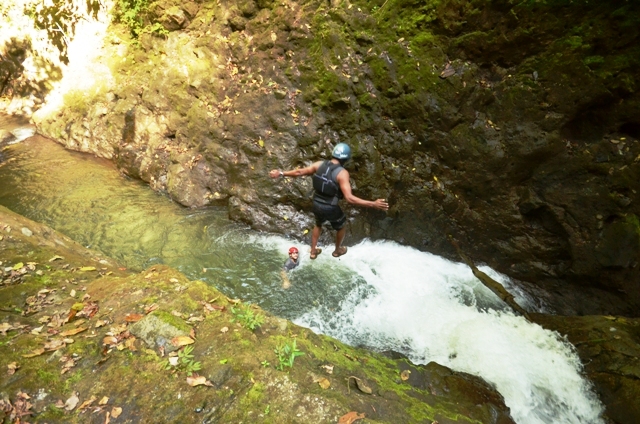 So, you’ve done a guided rappel down a 150-foot gushing waterfall. Ho-hum.

Now you’re ready for the next extreme adventure adrenaline fix. How about waterfall jumping?

“People have been rappelling down waterfalls and going river rafting, and they’re looking for the next adventure,” said Desafio Adventure Company owner, Christine Krishnan. 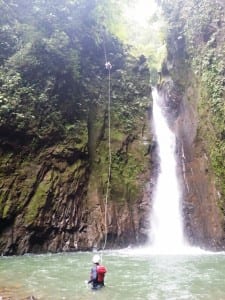 Canyoning – also called canyoneering – is the popular adventure sport of rappelling down waterfalls and traversing a river canyon. Called “Costa Rica’s most extreme tour”, the Gravity Falls canyoning adventure by Arenal Volcano, Costa Rica, is for extreme adventure enthusiasts and adrenaline junkies. You have to like the tour name’s play on words too.

“We found the most amazing canyon near La Fortuna, 25 minutes toward the Balsa River in the town of Valencia,” Christine Krishnan noted. “Jump off high canyon walls into deep, crystalline pools of water, and rappel down rushing waterfalls!” reads the tour information.

The Gravity Falls Costa Rica canyoning adventure involves an 80-foot rappel down a rushing waterfall into a deep pool, five cliff diving waterfall jumps ranging from five feet to 25 feet, a canyoning swim through a narrow passage, and other climbing adventures. It takes place in an isolated rainforest canyon by the Children’s Eternal Rainforest near the private entrance that Desafio Adventure Company uses for its Balsa River Rafting trips. 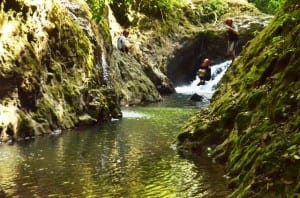 “It has a very cool expedition feel to it,” said Desafio Adventure co-owner, Suresh Krishnan. “It is different from everything else and is the newest most extreme tour in the Arenal area. It’s an extra high adventure; the more extreme stuff for adventure lovers!”

So, how is the four-hour Gravity Falls tour different from the Lost Canyon Adventures Canyoning tour, one of Desafio’s most popular adventure tours? Said Suresh Krishnan: “Do you want to get wet and wild? You should go to the Lost Canyon. If you want to go on an expedition of an exclusive extreme waterfall tour, then you should go to Gravity Falls.”