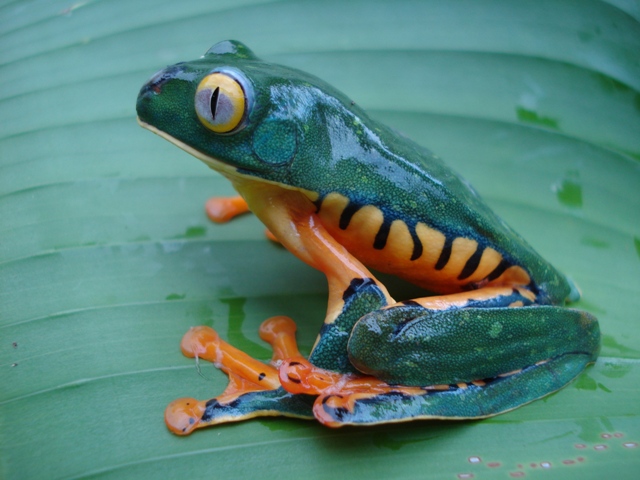 Totally different weather patterns from the rest of the country have made the Costa Rica Caribbean region unique for plants and animals. Explore this special ecosystem on a tour at Veragua Rainforest Eco-Adventure Park.

However, the weather patterns are completely different in the Costa Rica Caribbean region, creating unique ecosystems in the Limon province.

With an average annual rainfall of 3.5 meters (11.5 feet), the Costa Rica Caribbean area really doesn’t have a clearly defined dry season. Humidity here is much higher as a result of heavy and moist air that hovers over the Caribbean Sea.

While trade winds from the Caribbean bring dry weather to the Central Valley and Pacific Coast from December through February, they fuel rain along the Caribbean. And when the rest of the country is covered under a wet umbrella of rain clouds in September and October, these months are the Caribbean’s sunniest.

“As moist air blows over the tall mountains that run through the center of Costa Rica, it cools and condenses. Heavy rain falls on the Caribbean slope, and relatively dry air flows down the Pacific slope. This effect, common in mountains throughout the world, is called a ‘rain shadow’,” notes travel writer James Kaiser.

“There is never a dry season in the Caribbean. There are times when it rains a lot less, maybe once a week, but it is never completely dry like in the Pacific regions,” commented José Salazar Zúñiga, biologist and Research Coordinator for the Veragua Foundation for Rainforest Research in Costa Rica. “Trees and plants never lose their leaves during the year like in the Pacific and Central Valley. Everything stays green in the Caribbean, always.”

This near constant rain creates the Caribbean region’s widely varied flora and fauna. Caribbean Costa Rica has one of the world’s largest nesting sites for several species of sea turtles at Tortuguero National Park. Endangered, colorful Great Green Macaws can only be found in the wild in Costa Rica’s Caribbean region. And there are far more amphibians in the Caribbean than in the rest of the country, explained Salazar.

Bordering the La Amistad National Park, the Veragua Rainforest Eco-Adventure Park private reserve covers 3,400 acres in the Caribbean coastal mountains. It is a hotspot of “incredible biodiversity” with “outstanding species richness”, according to Harvard University. For instance, Veragua is the most frog-plentiful place in Costa Rica, with 54 distinct frog species recorded there by Salazar and his team of biologists.

“In the Pacific, there are species of frogs that hibernate in the earth until the rains return. You don’t see this as much in the Caribbean,” noted Salazar.

You can see distinct plants and animals of the Costa Rica Caribbean on a tour at Veragua Rainforest Eco-Adventure Park. The glimmering, bright blue wings of Costa Rica’s blue morpho butterflies will get your attention in Veragua’s Butterfly Garden. Be amazed by bright blue, yellow and green red-eyed tree frogs, and iridescent electric green iguanas in the Frog Habitat and Reptile Exhibit. Shiny metallic beetles and sinister-looking spiders almost don’t seem real in the Insect Exhibit. Not to mention the incredible bird watching at Veragua Rainforest, where you can easily see at least 80 bird species in one day.

Located less than an hour from the Caribbean port of Limon, the Veragua Eco-Adventure Park offers one of the best wildlife and rainforest tours in one location.

Come see why Trip Advisor has awarded Veragua Rainforest the Certificate of Excellence four times and rates the park No. 1 of Things to do in the Port of Limon.