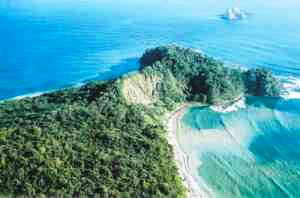 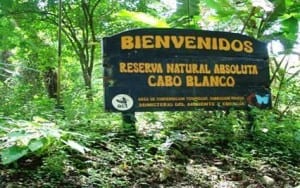 The tiny nature reserve at the extreme southern end of the Nicoya Peninsula in Costa Rica seems too pretty and unassuming to have changed history, though it did. 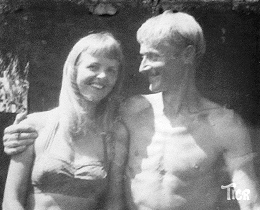 It all started in 1960, when Swede Nicolas Wessberg (known as Olaf or Olle) and his Danish wife Karen Mogensen bought a farm near the town of Montezuma on the southern Nicoya Peninsula on the Pacific Coast. Like much of Costa Rica at the time, the forest on the peninsula was completely cut for farming and cattle except for a small piece of primary forest.

The nature loving conservationists, impressed by the abundant wildlife and the enormous size and diversity of trees still left, bought 3,100 acres with the help of an international conservation organization. In October 1963, the Costa Rican government gave it the status of the country’s first privately protected reserve, which eventually led to the development of Costa Rica’s extensive national park system.

Since before the time of the Spanish conquistadors, this area has been known as the “White Cape,” or “Cabo Blanco,” for the bird guano-encrusted rock island that is located 1.6 km offshore. Cabo Blanco Island is an important seabird sanctuary, inhabited by large numbers of Brown Pelicans, Magnificent Frigates, Laughing Gulls, Ospreys and the largest colony of Brown Boobies in Central America. 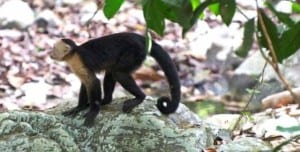 About 150 species of trees have been identified in the Cabo Blanco Absolute Nature Reserve. The forest is home to animals such as white-tailed deer, agoutis, armadillos, anteaters, coyotes, porcupines, raccoons, coatis, and howler and white-faced capuchin monkeys. Wild cats include margays, ocelots and jaguarundis. Due to the combination of sea coast, freshwater rivers, mountains and forest, you can see hundreds of different types of birds, including roseate spoonbills, kingfishers, toucans and bellbirds, in addition to the sea birds. 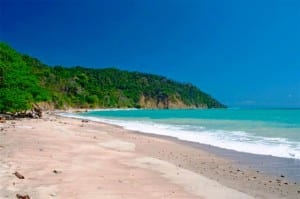 The Cabo Blanco Absolute Nature Reserve is open Wednesday to Sunday from 8:00 a.m. to 4:00 p.m. There are two main trails to hike. The shortest trail, called “Sendero Danes” (Danish Trail), is 1.3 km long and can be easily walked in a morning or afternoon. The longest trail, called “Sendero Sueco” (Swedish Trail), is more than 4 km and leads you to the pristine white sand beach in front of Cabo Blanco Island. This trip will take more than half a day, so plan to bring snacks, plenty of drinking water and allow time to enjoy the beach and have a swim. There are fresh water showers and drinking water available at the beach.

Where to stay on the Nicoya Peninsula: 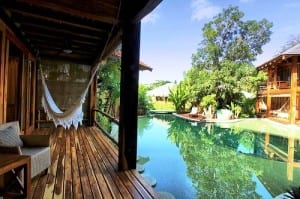