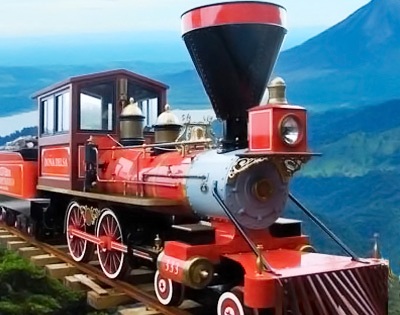 As with anything, it begins with a story.

rning to grow from subsistence farming to being a world player with agricultural exports chooses to think big. Costa Rica is the country, and coffee is its most valuable commodity. The year is 1871.

This is the decade of enormous world industrial, urban and agricultural growth, expansionism and technological “miracles.” In these next years, the telephone, the light bulb, the phonograph and the steam drill will be invented – radically changing modern life. Railroads were sprouting like vines everywhere; just two years earlier in 1869, the First Transcontinental Railroad completed linking the East and West coasts of the United States.

The Costa Rican government, led by President Tomas Guardia Gutierrez, and the nation’s powerful coffee barons set their sights on radically changing Costa Rica’s future by linking San Jose and the Central Valley with the Caribbean port of Limón via their own “trans-country” railroad. They passionately needed to get their coffee, known as “granos de oro” (“grains of gold”), to their main export market of Europe – principally Britain. The current method of sending sacks of coffee by oxcart from the Central Valley to the Pacific port of Puntarenas, the easiest route at the time, and then by ship around the tip of South America and all the way over to Europe was taking far too long and costing far too much.

So, they hired American Henry Meiggs, who had built railroads in the Andes in Chile and Peru, to oversee the construction. The 60-year-old Meiggs brought his nephew, Minor Cooper Keith, down from New York to help. When Meiggs died in 1877 finishing a railroad in Peru, Keith took over full leadership – changing his life and the lives of Costa Ricans forever.

te was to follow the Caribbean coast from Limón until the small port of Matina, then head inland up the Reventazón River Valley. After that, it divides to cross the northern mountains, with one branch going north of Irazú Volcano, and the other traversing south of the Irazú and Turrialba volcanoes through the Ochomogo Pass of Cartago, until the lines meet up in San Jose.

However, starting in Limón, the first 25 miles alone sent some 4,000 men to their graves, including three of Keith’s own brothers. Malaria, yellow fever and dysentery, lack of fresh food and clean water were the main culprits. Initially, Meiggs and Keith had difficulty getting Costa Rican laborers, so they hired Chinese indentured servants, out-of-work Italians and even U.S. convicts. Everything changed when Keith finally insisted in 1872 on bringing in Jamaicans to clear the forest and lay the railroad tracks. Former slaves from Africa and their descendants, the Jamaicans were used to the heat and humidity, and better yet, they could speak English with their North American bosses.

Keith’s pivotal decision both solved his railroad problem and also created Costa Rica’s unique Caribbean culture influenced by the Jamaicans who populated the area. To help feed his huge crews of workers Keith planted bananas along the train’s route – another key decision that would further change his and the country’s future.

Eleven years along, the project stalled in 1882 when the Costa Rican government ran out of money. Keith saved the day by raising funds and renegotiating Costa Rica’s loans with London banks. In turn, he was given 800,000 acres (3,200 km2) of land and a 99-year lease to operate the railroad. After a grueling 19 years, the San Jose- Limón railroad finally finished in 1890. Problem was now coffee exports alone couldn’t pay the railroad’s bills

. In desperation, Keith filled the empty railcars with the bananas conveniently located along the rail route. He sent a trial run to the USA by ship, and they were immediately a hit. He began running a steamboat line from Limón to New Orleans shipping the bananas.

Keith’s crucial banana-planting decision for the railroad turned into a “banana empire” stretching from Colombia to Guatemala. When he merged his lucrative banana trade in 1899 with the Boston Fruit Company, which was dominating the Caribbean, the United Fruit Company was born and Keith became the most powerful man in Central America. United Fruit not only transformed Costa Rica’s economy and culture, it also shaped the history of the rest of the “Banana Republics” of Central and South America.

It took a while, but Costa Rica was finally completely connected by rail from east to west in 1910. While Keith toiled in the Caribbean, laborers built a rail line from Alajuela to the capital city, which finished in 1873. Then, in 1897, workers began building the Pacific Railroad from Puntarenas to San Jose. After its own set of challenges, the Pacific Railroad officially launched on July 23, 1910, when the first engine, “Maria Cecilia,” steamed out of Puntarenas up to the Central Valley with passengers and cargo.

Unfortunately, the heyday of Costa Rica’s

rail travel was destroyed in a 7.5-scale earthquake in Limón on April 22, 1991. So much damage was caused to rail lines and bridges in the area that the route has never been re-built. The Pacific Railroad kept functioning regularly up until 2010; a tourist train called “Tico Train” operated from about 2004-2010 taking passengers from San Jose to the Pacific port of Caldera. It was popular, but high costs of maintaining the tracks and trains put it out of business.

Nowadays, rail transport in Costa Rica is owned by INCOFER (Costa Rican Institute of Railways). Over the past 5 years, INCOFER has revamped and developed the Central Valley’s narrow-gauge rail lines to initiate suburban commuter trains in the

San Jose metropolitan area. Freight trains still sometimes run between San Jose and the Caldera port, and in the flatlands of the Limon area.

It is possible, however, to return to the golden age of Costa Rican rail travel with the unique and enchanting Monteverde Cloud Forest Train tour. A replica old-fashioned steam locomotive pulls vintage black and red rail carriages on traditional narrow-gauge tracks deep into Monteverde’s

famous cloud forest. The 90-minute journey departs every hour between 8:00 am and 4:00 pm every day of the year. The Monteverde Cloud Forest Train is an especially fun one-day tour in Monteverde, not to be missed!