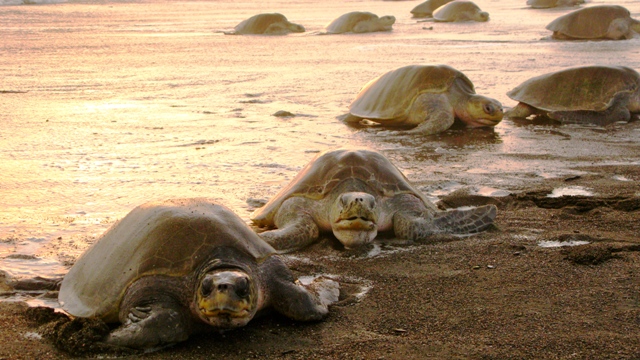 There are plenty of beaches covered with shells in Costa Rica. The beaches near Nosara Costa Rica, however, are spread with a different kind of shell – that of nesting sea turtles.

This time of year, from July to December, hundreds of thousands of Olive Ridley sea turtles swim to these remote beaches of the Nicoya Peninsula on Costa Rica’s Pacific Coast. They arrive en masse at the Ostional National Wildlife Refuge, slowly hauling their heavy bodies out of the surf and up the sand to dig their nests and lay their eggs.

This amazing phenomenon of massive arrivals of tens of thousands of turtles at one time coming ashore to lay their eggs has been called one of the world’s most spectacular nature events.

Founded in 1984, the Ostional National Wildlife Refuge in Costa Rica is the second largest nesting site in the world for Olive Ridley sea turtles, along with Leatherback and Pacific Green sea turtles.

July to December is the time for the mass arrivals, although sea turtles nest at Ostional all year round. Called “arribadas” in Spanish (meaning “arrivals”), the non-stop stream of slow yet determined female turtles coming ashore to build their nests and carefully lay their eggs lasts a few days up to a week. There are usually several “arribadas” in the same season. The largest recorded so far in Ostional happened in November 1995, when close to 500,000 turtles came ashore.

Usually just before or after a new moon, the turtles start arriving on the high tide at night, using the high surf to propel them further up the sand and the protection of darkness against predators. Turtles use their large fins to move up the beach and dig their sand nests. Each will lay between 80 and 100 white soft-shell eggs, then cover the shallow nest and return to the ocean, leaving their offspring to their own fate.

Although more than 10 million eggs are laid during each season, only a fraction of these will hatch 60 days later; and even fewer hatchlings will make it to the ocean and survive – a reminder on how important it is to protect these endangered turtles.