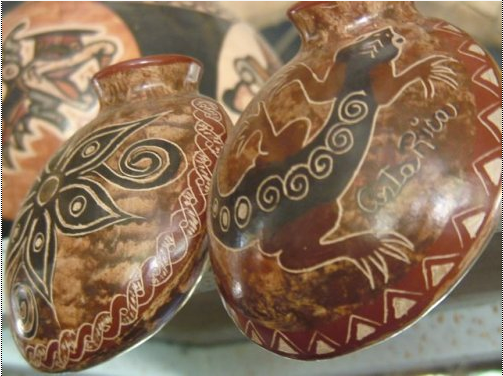 Learning about a country’s culture is one of the fun and interesting aspects of traveling. In Costa Rica, an intriguing cultural location is the village of Guaitil in the northern Pacific province of Guanacaste.

Located between the small cities of Santa Cruz and Nicoya, Guaitil is famous for its pottery in the pre-Columbian style of the Chorotegas – one of the main indigenous groups of Costa Rica. The whole town is dedicated to the production of clay pottery, following the ancient traditions of their ancestors. The nearby town of San Vicente also is dedicated to Chorotega pottery.

The Chorotega tribe once lived across Costa Rica’s entire northern Pacific zone in what are now Guanacaste and the Nicoya Peninsula. “Nicoya” is the name of the Chorotega chief who ruled the area when Spanish conquistadors arrived in 1523. The Chorotega language, culture and community have been largely lost, apart from the indigenous reserve of Matambú near the town of Nicoya, and the tradition of ceramics.

The secrets of their craft have been passed from generation to generation over the past 3,000 years, creating a centuries-old cultural bond that economically supports the community. Potters use local clays, raw materials and the same tools and techniques of their Chorotega ancestors to make beautiful works of art. In the artisan studios that ring Guaitil’s town park, you can find for sale clay pots, big bowls, pitchers, vases, plates, ornaments, animal-shaped flute whistles, and other crafts. Pottery sales are the main source of livelihood for residents. Students at Guaitil’s primary school are also taught the ancient ceramic art.

However, the clay of their ancestors is now getting hard to find. Local potters say the clay they use for their ceramic arts can no longer be found in any other area except on a piece of private land in San Vicente, about 2 km from Guaitil. Community leaders have been talking with the land owners for nearly 10 years in hopes of securing the land to preserve the clay. Potters now have to pay to extract the clay, and the town is working to raise money to buy the property.

How is Chorotega pottery made?

Costa Rican Chorotega pottery is 100% handmade. The pottery is crafted by first drying the clay, and then pulverizing it in a large wooden mortar with a huge wooden pestle until it reaches a powdered form. The clay dust is then mixed with “iguana sand,” a type of very fine freshwater sand so called because iguanas typically lay their eggs in it. After water is added to the mixture, the clay is kneaded by hand until soft and pliable. The artist then shapes the object to be created on a manual hand-operated pottery wheel, using such tools as wooden sticks, leather or rubber pieces, a knife, etc. to shape and form the piece.

The clay object then needs to dry for 24 hours. Afterward, a potter uses a “sukia” stone – a smooth, oval, quartz-like stone – to hand-polish the object which smooths out imperfections and gives it shine. The more a piece is polished, the smoother and shinier it will be after firing. After polishing, it is time for decorating, etching and painting. Earth-colored pigments, in reds, oranges, creams and blacks, that are used to decorate the pottery are made from colored rocks, ground into a fine powder and mixed with water.

Very special kilns made of bricks, dried mud and horse manure, are used to fire these exquisite ceramic pieces when they are completely ready. There are no thermometers on the ovens and the extremely high temperatures are maintained by the type of wood being burned.

On the day tour, you will visit the Guaitil pottery town, near Nicoya, where you will learn about the ancient Costa Rican traditions and culture of the Chorotega tribe. You will see a pottery-making demonstration and have an opportunity to purchase ceramic souvenirs.

The day tour combines a visit to the nearby Palo Verde National Park, where you will travel by boat along the broad Tempisque River to see myriads of crocodiles, native and migratory birds, iguanas, monkeys, anteaters, sloths and snakes. This remote sanctuary, where the murky river pushes sediment into the Nicoya Gulf, is known for its spectacular wetlands where you can find thousands of resident and migrating marine birds. Species you’ll have a chance of spotting include egrets, herons, spoonbills, flycatchers, storks and more.

Lunch of traditional Costa Rican cuisine at a local restaurant is included in the day tour.