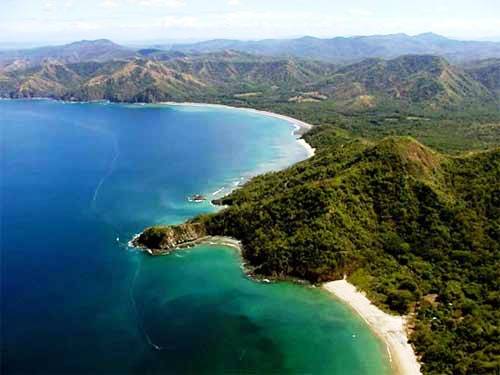 Costa Rica. You’ve probably heard of it. The tiny Central American country is big in tourism news. You may even know someone who’s been there. When you hear the name, you probably think of beautiful tropical beaches, rainforest, surfing, volcanoes, hot and steamy jungle.

But what’s important to know so you can plan a visit?

Check out our top 10 list of What to Know for Travel to Costa Rica:

Costa Rica lies at the bottom end of Central America, sandwiched between Nicaragua to the north and Panama to the south. The tiny Switzerland-sized country is blessed with more than 900 miles (1,460 km) of coastline from both the Pacific Ocean in the west and the Caribbean Sea in the east – that’s a lot of beaches! Despite its small size, Costa Rica is filled with exuberant biological diversity – 5% of all plants and animals in the world – due to the convergence of two hemispheres, two oceans, and an irregular mountainous and volcanic topography creating diverse microclimates. That means a lot of variety for travelers!

With so much diversity, there’s something for everyone in Costa Rica – one of the reasons that more than 1 million tourists from all over the world visit every year. You have steamy rainforest, chilly and misty cloud forest at high elevations, Central Highlands with dairy farms and coffee plantations, dry tropical forest in the northwest, active and dormant volcanoes making naturally bubbling hot springs, lowland marshes and mangrove estuaries, rushing rivers providing world-class whitewater rafting, and marvelous beaches in a rainbow of colors – waters ranging from light turquoise to deep azure with golden, black, white and even pink sand! The Pacific Coast and Caribbean Coast differ from one another as much in topography as in culture, and even language.

It’s important when planning your visit to note how much time you have and prioritize the main places you’d like to see. Because unless you have the big bucks to charter a private plane or helicopter, you can easily spend all of your time traveling to destinations without really seeing a thing. Costa Rica is small, but it is mountainous, with most of its roads only 2 lanes, narrow and winding.

To get a better idea of where to go, check out this great description of Costa Rica’s main areas. For a 1-week trip, choose 1-2 areas. For a 2-week trip, 2-3 or even 4 areas are fine. You can always come back!

Costa Rica lies in the tropics between 8 and 11 degrees north of the equator. There are only 2 seasons in Costa Rica – “verano” (summer) and “invierno” (winter) – which correspond to the dry summer season from December to April and the rainy winter season from May to November. The hottest months are March, April and May, and the wettest months are September and October. Temperatures fluctuate greatly based on elevation and microclimate. Beaches are significantly hotter and steamier, for instance, than going up in elevation to the Central Highlands and lower range mountains, or even higher to the chilly and foggy cloud forest.

Costa Rica’s rain falls mainly on the Caribbean coast, giving the Pacific a much more arid climate. Even in the rainy season, rain will not fall during the whole day, every day. Each season has its own beauty and unique characteristics. In rainy season, the landscape is green and lush; dry season is perfect for orchids, bougainvilleas and colorful trees that only flower then.

Main tourism time stretches from Christmas to mid-April, and again in July and August, tying in with the dry sunny season and northern countries’ winter and later summer vacations. Christmas week is the most expensive time to travel. A “secret” time to visit Costa Rica away from the tourist crush, when many places have dropped prices and the weather is still kind, is from late-April to late-May and the first 2 weeks of December.

You name it, Costa Rica’s probably got it. Want adventure? Try hurtling through the tree canopy attached to a steel cable really high off the ground on a canopy zip-line tour, or bouncing down frothing rapids on a whitewater rafting trip, surfing world-class waves, scuba diving amongst huge schools of fish, galloping a horse down the beach or across countryside, or hiking very near an active volcano. You can also find paragliding, hot air ballooning, waterfall rappelling, canyoning, ATV tours, motorcycle tours, windsurfing, sportfishing, and the list goes on.

Like nature and wildlife? Costa Rica can boast that it is a country with one of the highest percentages (25%) of its territory designated as protected areas in national parks and private reserves. There are about 850 species of birds, 360 different kinds of reptiles and amphibians, 1,000 or so orchids, 2,000 types of trees, and around 200 kinds of mammals including the exotic jaguar.

Need relaxation? Lying in a hammock under swaying coconut palm trees in a balmy sea breeze sound good? Or how about soaking work-tense muscles in natural hot springs and volcanic mud baths, followed by an invigorating aromatherapy massage? From remote beaches or mountain areas completely away from it all, to first-rate spas, resorts and yoga retreat centers, you can find hundreds of ways to relax in Costa Rica.

There are daily flights from most North American hub cities, daily flights within Central America, and more and more flights coming directly from Europe.

6. What language do they speak?

Costa Rica was once part of the Spanish Empire, therefore the most widely spoken language in Costa Rica is Spanish (97% of the population); although there are other native languages used mostly within indigenous reserves. On the Caribbean Coast, many inhabitants descend from Jamaican origin thus speaking a kind Creole-English dialect. Most tourism businesses, and in the San Jose metropolitan area, have a high percentage of persons who also speak English (it is the primary foreign language taught in all Costa Rican schools).

The Colon (¢1.00) is the national currency of Costa Rica. The exchange rate against the US dollar and Euro can vary day by day. It’s better to exchange money at a bank rather than at the airport. The current exchange rate is ¢506 colones to $1.00 US dollar. US dollars are accepted commonly in tourist areas, but you are subject to that business’ exchange rate, which may or may not be advantageous.

Automated Teller Machines (ATM’s) can be easily found in most populated areas of Costa Rica and can give you either colones or US dollars. Most international credit cards are accepted throughout the country: Visa, Master Card and American Express.

8. What kind of food do they have?

Costa Rican cuisine is based on the Latin American staples of rice and beans (black beans). A

typical meal, called a “casado”, for lunch or dinner consists of white rice, black beans, fried plantains, small salad portion of lettuce and diced tomatoes, corn tortillas and either fish, chicken, pork or beef cooked in a variety of ways. Typical breakfast is “gallo pinto,” which is white rice and black beans mixed together with diced white onion, red pepper, garlic and cilantro; usually this is served with eggs, fried plantains, corn tortillas and maybe white farmer’s cheese. Costa Rican food is not spicy at all, unlike its northern neighbors of Guatemala and Mexico.

Given that Costa Rica is a coffee-producing country, strong coffee is the nation’s delicacy. Besides morning coffee, daily life stops around 3:00 pm for a “cafecito” (coffee break). Coffee here is always taken with a small snack, be it salty or sweet, and never drunk just on its own.

Costa Rica abolished its army in 1948, dedicating itself to social services like education and medical care. In the past 10 years, as the population has grown and society has modernized, crime also has increased – this also has to do with drug trafficking between Colombia and Mexico and the rest of the world passing across Costa Rica and the rest of Central America. Like anywhere in the world, crime is high in the big cities, but on the whole the country is safer to travel in than many western countries. Be smart, pay attention, don’t trust strangers too much, and follow the same “street smarts” you would in any foreign country. Here are some good safety tips.

10. How can I make my travel plans easy?

There are many resources on the Internet to give you information and travel assistance for Costa Rica, if you want to take the time to make your own plans. An easier way is to contact a travel agency or tour operator specializing in Costa Rica. One such expert is Valle Dorado Tours, based in San Jose, Costa Rica. One-stop shopping for tailor-made trips has many advantages – someone else takes care of all of the details and arrangements based on what you want and like, meaning you get personal and flexible service, and oftentimes agencies get special rates and deals.

We look forward to welcoming you to our marvelous country!