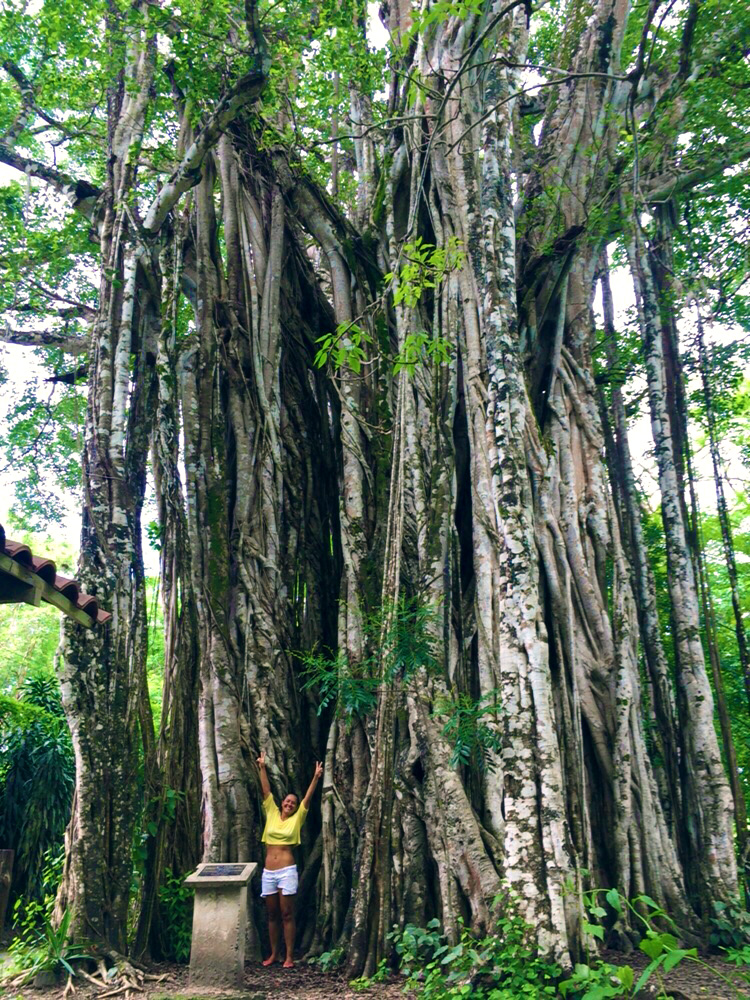 There is a very impressive giant Banyan tree, also known as Higueron, that lives in the town of Cabuya, Puntarenas, on the Pacific Coast.  If you’d like an impressive and beautiful photograph, stop there on your way to local beaches.  But is there more to this tree than a pretty social media post?

The Banyan Tree starts its life as an epiphyte, germinating in the in the crevices of other trees, its roots growing while feeding on the host, eventually covering and strangling it.  That is why is it also known as the “Strangler Fig” or “Matapalo”, which roughly translates to “Killer tree.” The figs it produces are eaten by birds, their droppings germinate over the cracks of host tree, then aerial roots take hold when they touch the ground.

The beautiful and enormous Higueron tree on the road from Montezuma to Cabuya has lived a happy life, being admired and photographed by tourists and passersby.  It has probably been there for decades, impossible to know exactly how long.  It was even awarded the title “Most Exceptional Tree in Costa Rica” in 2009 by the INBIO, the National Institute for Biodiversity.

Vishnu, a Hindu deity, in one of his incarnations, is shown under the shade of a Banyan Tree, teaching humanity lessons of philosophy and sciences, and initiating them in the mysteries of life and death.  The Banyan Tree is the national tree of India and is venerated for its ability to live and grow for centuries, thus representing longevity and immortality.  In Hindu mythology, the Kalpavriksha, or Tree of Life, is divine and may fulfil wishes and assist in material gains.

The Higueron Tree has medicinal uses, the milky white latex extracted from its leaves or figs has antiseptic properties and may be used to cauterize wounds.  Its leaves and bark may be mixed with other ingredients for treatments from mouth ulcers, to skin diseases, to baldness.

During your stay at Pranamar Villas and Yoga Retreat in Costa Rica, make sure you take the time to stop by and visit the giant Higueron on the road to Cabuya.  You might be inspired to sit, reflect and meditate on what this tree of life might teach you.  Will it be serenity, perseverance, strength, growth?