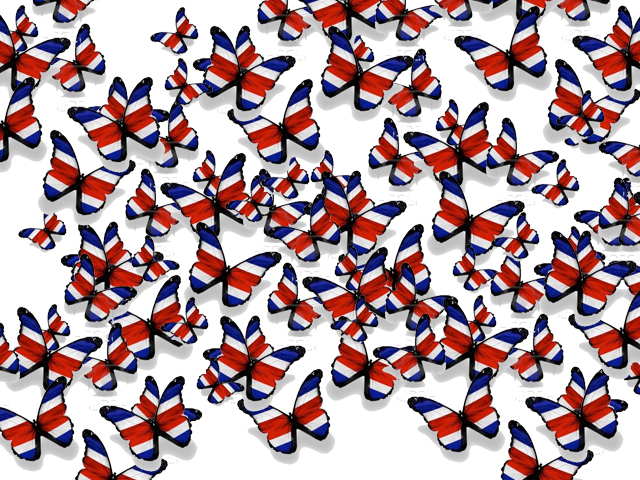 In the case of butterflies, it pays to look like your neighbor.

butterflies’ natural promiscuity has led to interbreeding and the creation of new species that look very much alike, according to a study led by University of Chicago evolutionary biologist, Marcus R. Kronforst.

“In evolutionary biology, mimicry is the similarity of one species to another which protects one or both.This similarity can be in appearance, behavior, sound, scent and location, with the mimics found in similar places to their models,” notes Wikipedia.

Mimicry, or looking like another, is important to butterflies to avoid being a tasty snack for birds and other predators. If a tasty or non-venomous butterfly is confused with a bad-tasting or toxic butterfly, both species will go unmolested and be more likely to survive.

The long-winged Heliconius butterflies are the species in the study whipping up interest. The butterflies, including one known as the “Costa Rican postman,” have bright orange markings on their wings and are toxic. Promiscuous habits have led to the creation of up to 45 new species from the butterflies’ interbreeding, scientists report. The interesting thing the geneticists have discovered is that all of the species resemble one another (Mullerian mimicry) with slight differences, which has led to shared survival tactics by baffling predators into avoiding a range of wing patterns.

The Butterfly Garden at Veragua Rainforest Research & Adventure, in Costa Rica’s Caribbean rainforest, is inhabited by some of the most colorful butterflies in the world, including the noteworthy Heliconius butterflies. A tour at the 1,300 hectare (3,212 acre) biology research center and adventure park lets you walk through an immense live butterfly garden, plus visit a research lab where staff scientists study the behavior and lifestyle of these vivid flying insects.

Veragua Rainforest Research & Adventure is located in the Talamanca Mountain Range about an hour inland from Costa Rica’s Caribbean port of Limón. Veragua Rainforest is an excellent one-day tour in the Costa Rica rainforest. Attractions include wildlife exhibits and science labs, an aerial tram, canopy zipline tour, rainforest hiking trails, a river with waterfalls, and a restaurant, café and souvenir shop.