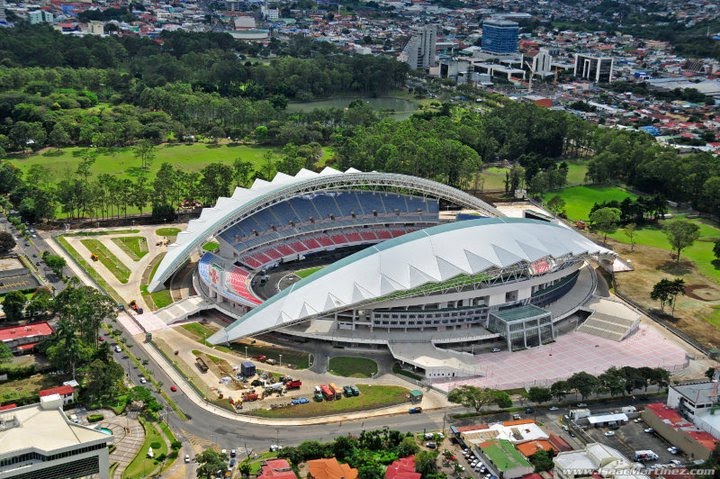 The National Stadium has been a really important piece in the history of Costa Rica, not only in the sports, but in other areas such as culture, politics and society.

Originally founded in 1924, popularly known as “La tacita de plata”, this place housed some of the highlights of Costa Rican football, as well as other disciplines such as atletics and cycling.

Also this stadium received great characters throughout its history, from the entertainment industry, politics and religion.

A large number of events were held at this stadium, events that marked in many aspects, the Costa Rica of today. Despite this, the stadium failed to meet the FIFA´s requirements during his later years, so it was used in other sports like athletics. By 2008, was demolished, in order to build the new National Stadium, donated by the government of China.

And it´s now, in 2011, where a new history is just about to start. The new stadium will be officially inaugurated by the end of March and beginning of April, with a lot of activities, both cultural and musical, and of course sporting. Its construction began in March 2009, located in the same place than the old stadium.

Costarican people, in general are very excited, because this new stadium changes in many aspects Costa Rica´s position in terms of sporting infraestructure and entertainment events. This stadium is one of the most modern and with the best technology in Central America and the Caribbean, with offices for 32 federations, two giant screens HD TV, a sports museum, running track and facilities for other sports such as table tennis, fencing and chess. It has a  total capacity of 35062 seats.

As I mentioned before, the stadium is the most modern in Central America, made out with the best technology in the world. Thanks to this, Costa Rica was named host in the Central American sports games in 2013, and also in the feminine world cup U-17 in 2014, with this event it would be the first time in history that an official world cup of FIFA, would be held in Central America.

The opening of the stadium is going to be a big event, full of different activities, the first one will be on March 26th, in a friendly game between Costa Rica and China, then it will be some concerts with national artists, and a big concert with Shakira. In addition to this, there will be also a game between Costa Rica and Argentina, along with other sporting activities.

There are a lot of emotions in the heart of “los ticos”, because this event goes beyond a simple opening, it mix history, excitement and proud in a whole combination. If you would like to be part of this big party, explore the new stadium, meet and share with Costarican people, and by the way enjoy the many attractives that Costa Rica can offer you, don´t think it much, just come and visit us!!!

There is a big amount of options, where you can choose, from hospitality, tours, food and services in general, my suggestion for this case, is stay in San Jose downtown, where you will have everything you need and more. If you decide to visit San Jose, Ritzli Hotel is an excellent option, they will offer you a strategic location, comfortable accommodation and a warm environment,  that will make you feel at home.