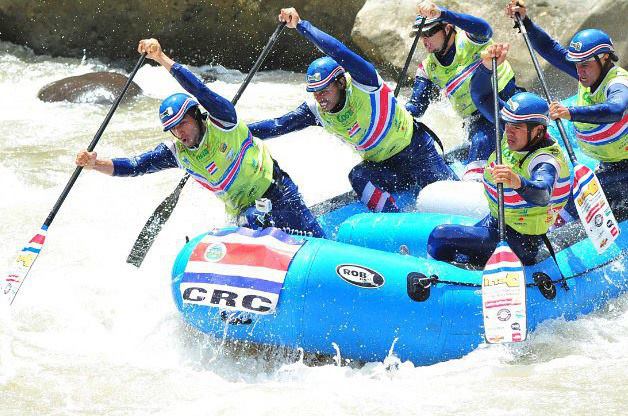 New Zealand is about as far from Costa Rica as you can get. That’s where 21 Costa Rican men and women are headed at the beginning of November to compete in the World Rafting Championships.

Set for November 13-24 in Rotorua, New Zealand, the biennial World Rafting Championships (WRC) will draw 69 teams from 27 countries to compete in four divisions with men’s and women’s categories – Open, Masters, Junior (under 23) and Youth (under 19).

The WRC is the pinnacle event in the highly-competitive whitewater rafting world, governed by the International Rafting Federation. The first IRF World Rafting Championships were held in Costa Rica in 1998, and most recently again in 2011. Top international teams match their whitewater skills in four events – a short sprint, head-to-head between two teams, slalom and a downriver endurance race. Raft teams are composed of six members with a 7th alternate.

Each of Costa Rica’s teams has its own story. The women’s team won a silver medal in slalom at the 2011 WRC; they are going for gold in November. The men’s team is the current Costa Rica National Champion and is hoping to place in the top three at the WRC. The star-studded master’s team is packed with rafting veterans who have 25 years of competition experience, including Rafael Gallo, who is owner of Rios Tropicales rafting company in Costa Rica and President and founding member of the IRF.

New Zealand will be the first WRC with a Master’s competition for team members over age 40. “We have the longest history of any team in the world competing internationally,” said Rafael Gallo. He and team captain, Victorino Urzola, participated in the first international rafting event with Project RAFT in Siberia in 1989, and team members have taken part in many subsequent world competitions. “It has been my dream to go to New Zealand,” Gallo remarked. “We hope to get some medals. We’re very good in slalom.”

Slalom is the forte of the women’s Costa Rica X-Pinner Team (sponsored by the X-Pinner sports clothing company). “The slalom is our event. Our trainer (Alejandro Contreras) competed in kayak in slalom and it is his specialty,” explained team captain Lil Castro. “The slalom is a really technical competition, and maybe because we were river guides, we’re good at slalom.” Besides the silver medal at the 2011 WRC, the team has placed well in slalom at Pan-American Competitions, earning a gold medal in 2010 in Brazil.

For the men’s Costa Rica Xtreme Team, the downriver is the event they hope to win. “We are river guides and know how to go down a river; we are experienced kayakers and that helps us,” explained team member Walter Centeno. “There is much more competition in the men’s events, and we train a lot in teamwork to perfect our coordination.” Team members have competed in five World Rafting Championships and are six-time Costa Rica National Champions.