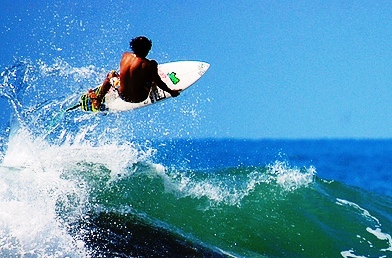 This year’s Costa Rica National Surfing Championship Finals promises to be one of the hottest surfing events of the year. For the first time ever, seven of Costa Rica’s top male surfers – all of whom are very close in points so far for the season – are vying board to board for the national Open Men’s Division title, making it the most closely fought matchup in Costa Rica Surfing Federation history.

“This is the first time that seven people have the same chances of winning the title,” said Costa Rica Surfing Federation spokesman Carlos Enrique Brenes, in a press release.

The Costa Rica Surfing Federation’s 12th Annual Championships, the seventh competition of the Olympus National Tour 2012 presented by Banana Boat, will run the weekend of August 24, 25 and 26 in Playa Hermosa, by Jaco, on the Central Pacific Coast.

All competitions will take place in front of the Backyard Hotel and Restaurant at Playa Hermosa. Anyone can watch from the beach at no charge. Costa Rica’s top surfers will battle it out for who will be national champions in the five men’s competitions, including the Open Division (with 48 competitors ages 18 and up), the Longboard (with 8 competitors), the Junior (with 32 surfers ages 15 to 17), the Boys (with 24 contestants ages 12 to 15) and the “Groms,” or young surfers (12 boys ages 12 and under). There also are two competitions for women, which include the Women’s Open Division (with 12 women over age 18) and the Women’s Junior (12 competitors ages 15 to 17).

The main event of the Finals is the Men’s Open Division Championship, with a take-home prize of $2,000. Wining the event ensures the national title. The current champion is Luis Vindas, who is ranked only 13th for this season. So far in the year, the first six competitions have had five different winners. Jair Perez of Jaco leads the pack in the #1 position and was favored to win, but is opting out of the competition instead to go to Virginia Beach, USA, to participate

That leaves 2nd ranked Noe Mar McGonagle as the favorite; and he is tied in points with Anthony Fillingim in third. McGonagle

won a bronze medal at the ISA Under-18 World Surfing Championship in Panama in May, helping the Costa Rican Junior National Surf Team gain 11th place in world rankings.

Meanwhile, in the Open Women’s Division, the fight will be between defending national champion Lisbeth Vindas (sister to Luis Vindas) and Nataly Bernold, either of which could win the title. Surfer Eve Johnstone follows closely in their wake, and could position herself to cause an upset.

Follow the news leading into the competition at CRsurf.com and Surfingcr.net.

For surfing aficionados, the weekend guarantees to be full of fun. Besides intense surfing competition, there will be the end of the season “Reef Afterparty” at the Morgan’s Cove Hotel in Jaco on Saturday, August 26, at 8:00 pm. It will feature live music and the winners of the Miss Reef Costa Rica contest. Tickets are 5,000 colones and you can get them from Witch’s Rock Surf Shops in Multiplaza Escazú, Multiplaza Este and Paseo de la Flores in the Central Valley, and at Aurora Yoga Studio in Jaco.

Right at home on Playa Hermosa, the surf training experts at Del Mar Surf Camp can help you share in the Costa Rican surfing buzz. Del Mar Surf Camp offers the ultimate surf vacation experience and surf instruction in Costa Rica, with a choice of three spectacularly beautiful locations – Playa Hermosa on the Central Pacific Coast, Nosara on the Guanacaste Pacific Coast, and Santa Teresa Beach on the Pacific’s Nicoya Peninsula. Del Mar Surf Camp specializes in surf vacation packages, yoga-surf retreats and day surf camps for adults, women only and families. Whether you’re a beginner, intermediate or advanced surfer, Del Mar will show you the time of your life.

Costa Rica combines warm water, consistent surf year-round, over 700 miles of coastline between both the Pacific and Caribbean coasts, literally thousands of beach breaks with easy access, and friendly people in a tropical paradise! The country’s irresistible charm is all of the other travel perks like active volcanoes, lush rainforest, cloud forest, jungle wildlife, and a myriad of other adventure sports and activities. Surf vacations are available now for August, September, October, November and December, at all three of Del Mar Surf Camp’s prime locations.