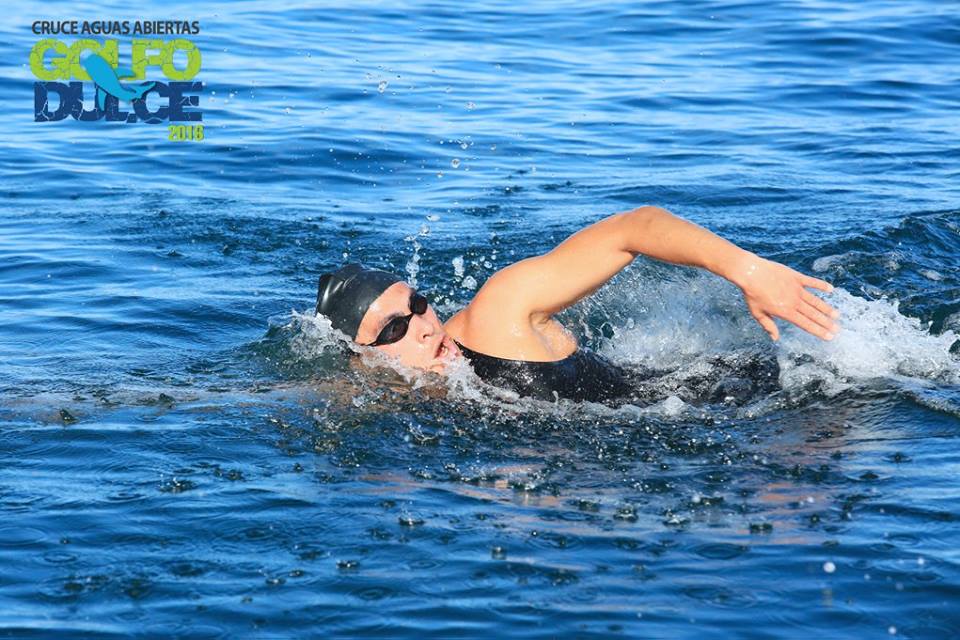 Golfo Dulce is one of the most amazing places in Costa Rica. Having the chance to swim in the pristine gulf with dolphins and whales is pure magic. That’s how it was for swimmers in the Golfo Dulce open water competition 2016 Cruce Aguas Abiertas in early September.

Swimmers from all over Costa Rica had the experience of a lifetime earlier this month, joining dolphins and humpback whales to swim across the Golfo Dulce.

Golfo Dulce is one of the most important marine habitats in Costa Rica, and is one of only four tropical fjords in the world. The 31-mile-long (50 km) pristine gulf by the Osa Peninsula is home to abundant marine life including dolphins, sea turtles, hammerhead sharks, giant whale sharks, sea birds, and migrating southern Pacific humpback whales (August to October).

Golfo Dulce’s extraordinary beauty and environment made it easy for swimmers to be joined at times by dolphins, and to see humpback whales in the blue depths below them.

Open water races of 1.5 km and 5 km were held Sep. 4, 2016, starting from the coastal town of Puerto Jimenez on the Osa Peninsula. Swimmers of all ages competed for medals.

The day before, on Sep. 3, 45 men and women jumped into the cool jade green water at 6:30 a.m. in front of Playa Nicuesa Rainforest Lodge, an eco-lodge near  the Osa Peninsula on a remote beach, to swim 14 kilometers in open water directly across the gulf to Puerto Jimenez.

Swimmers were accompanied by assistance kayaks, stand-up paddle boarders, and boats with lifeguards and rescue personnel from the Costa Rica Red Cross.

Rodolfo Sanchez won the 14 km race across the gulf with a winning time of 2 hours, 50 minutes and 36 seconds. Coming in at second place was Angelica Astorga with a time of 2 hours, 58 minutes and 13 seconds; and third place went to Mario Bonatti who finished in 2 hours 59 minutes and14 seconds. Sanchez also won first place in the men’s 5 km race the following day.

This was the second year in a row that Playa Nicuesa Rainforest Lodge has been the starting spot for this unique open water swimming competition across Golfo Dulce.

“We are sponsoring one of the most important nature-sports competitions taking place in Golfo Dulce. We are proud to host this challenging competition and be it’s starting point for the second consecutive year,” said Marcelo Lopez, Resident Manager at Playa Nicuesa Rainforest Lodge.

Wild, breathtakingly beautiful and incredibly biodiverse, southern Costa Rica is less-traveled than other parts of Costa Rica. For adventurers and nature-lovers, the southern Pacific region is a wondrous, untouched paradise to explore.

Discover the secrets of southern Costa Rica when you stay at Playa Nicuesa Rainforest Lodge. Take advantage of Nicuesa Lodge’s special offer: “Reserve 3 nights, get the 4th night free”, valid from Nov. 16 to Dec. 15, 2016. The lodge will be closed from Oct. 1 to Nov. 15 for annual maintenance.