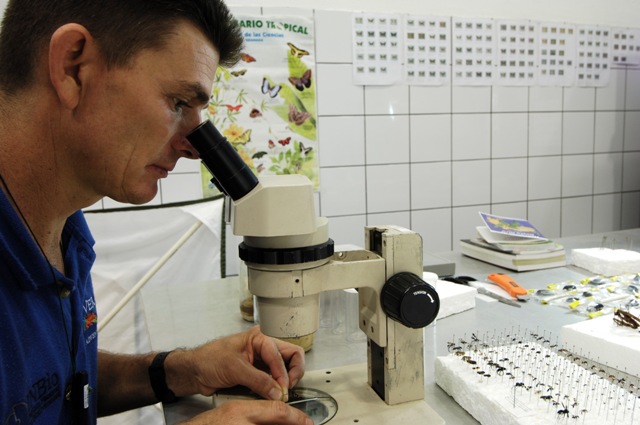 Abundant scientific research opportunities at Veragua Rainforest in Costa Rica have captured the attention of international university groups, who come to study the country’s wondrous biodiversity.

Tramping around a damp rainforest in the dark with big rubber boots and headlamps is not the usual picture of a university spring break vacation. But for a group of first year Ph.D. students studying herpetology at Harvard University, it was perfect.

In April 2016, on the students’ spring break, they visited Costa Rica with Harvard University professor Jonathan Losos – Professor of Organismic and Evolutionary Biology, and the Curator in Herpetology at the Museum of Comparative Zoology – who has led student research trips to Costa Rica since 2013.

Excited to see some of Costa Rica’s rich biological diversity, the group spent their first days at Veragua Rainforest in the central Caribbean mountains, where they went hunting for anoles. Anolis, or anoles, is a genus of lizards in the Americas that live mostly in trees and are distinguished by a throat fan that (in males) is typically brightly colored.

“The trip started with a day and a half at Veragua Rainforest. We saw tons of frogs and a handful of snakes, but anoles were hard to come by except for a few individuals along shallow, slow-moving streams (A. humilis, A. limifrons, and A. oxylophus). One of our most exciting finds of the trip was along one of these streams – an A. pentaprion hugging a narrow stem at eye level. It was shocking to see this lizard so close to the ground as it is often found high in the canopy and has even been observed gliding between perches. While many mainland anoles don’t fall clearly into the classic ecomorph categories, this lizard, with its small legs, long body and head, and slow but sneaky evasive behavior, is very reminiscent of West Indian twig anoles,” wrote student Nick Herrmann in a blog for Anole Annals.

Veragua Rainforest Park is a relatively new study area in Costa Rica, compared to the research areas used for decades like La Selva Biological Station near Sarapiqui. Yet Veragua is becoming known as a hotspot of biodiversity in Latin America.

The Veragua Foundation for Rainforest Research engages in ongoing scientific investigations within the 3,212-acre (1,300-hectare) private reserve of the Veragua Rainforest Eco-Adventure Park. Its location in the Talamanca Mountains by the La Amistad International Park – both UNESCO World Heritage sites – has largely been unexplored. More than 11 new animal species have been discovered there by the Veragua scientific research team, and 15 endangered species have been recorded living in the area.

Professional scientists, along with university and high school student groups, come to Veragua mainly to study frogs, reptiles, amphibians and plants. They stay at the Veragua research station, working in cooperation with resident biologists from the University of Costa Rica.