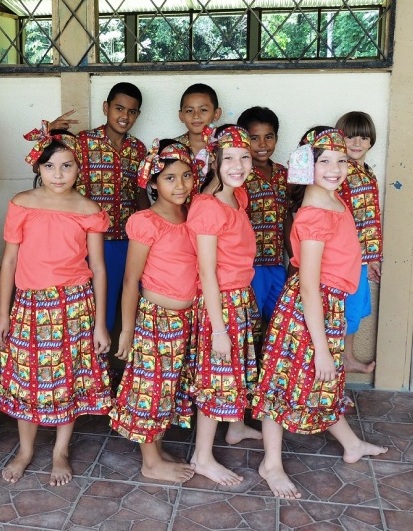 A decade ago the three tiny communities of Brisas de Veragua de Limon, Union of the Peje River and Rio Blanco,  in the mountains near the port of Limon on Costa Rica’s Caribbean Coast, subsisted solely on logging, agriculture, and working on cattle ranches, and unemployment was severe.

That all changed when Veragua Rainforest Eco-Adventure Park came into the area nine years ago.

Daniel Torres, Site Manager at Veragua Rainforest Eco-Adventure, vividly remembers the first time he held an employment recruiting day, back in 2007 before the park opened to the public.

“So many people came because unemployment was really high … even children 12 years old were asking for jobs,” Torres said. “At that time, most people from the area had to travel from their homes to look for work in other areas.”

During the two years of park construction, Veragua hired 140 men from the local area, many of whom stayed on working at the 3,212-acre park and private reserve in maintenance and grounds keeping.

“One of the policies of the company is to contract people from the region to work at Veragua,” Torres explained.

Of the 21 employees who now work directly for Veragua, 70% are from the local area. Guides, who must be bilingual and naturalists, come from the greater Caribbean region since these skills aren’t common in the communities by Veragua, Torres said. And there also are 60 freelance contractors who work with the large groups on cruise ship excursions to Veragua from Limon.

Veragua Rainforest Eco-Adventure Park brings visitors into the Costa Rica rainforest to experience nature and wildlife, and enjoy adventures like an aerial tram, waterfalls and zip lines. Veragua shares its border with the impressive La Amistad International Park (“Friendship International Park”), the second largest nature reserve in Central America – a region of extraordinary biodiversity, which is why Veragua also is dedicated to rainforest research.

Through the Veragua Foundation for Education & Rainforest Research, Veragua Rainforest helps the schoolchildren at the local elementary schools in Brisas and Peje with school supplies and school improvements and maintenance. And Veragua has improved the roads through the communities, and changed the practice of hunting wild animals to developing environmental conservation.

“People now have stable employment with insurance and end-of-the-year bonuses. People are learning English, where no one knew how to speak English here; and they have learned skills like operating zip lines for the canopy tour,” said Torres. “Veragua has greatly impacted the children here too. When you ask them what they want to do in their lives, they say they want to work as guides or in management or other jobs at Veragua. They view Veragua as the best employment in the region.”

Visit Veragua Rainforest Eco-Adventure Park for one of the best rainforest tours in Costa Rica. Your visit to Veragua helps support their community outreach programs.