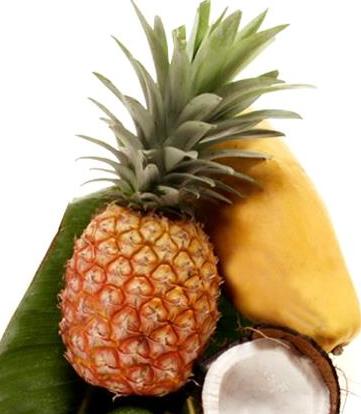 What if keeping a doctor’s visit at bay is solved simply by what we eat? Even more, what if herbs grown right in our backyard and foods we can pick up at any corner store can heal what ails us, including the pesky common cold?

Humans have relied on foods and herbs for medicine for thousands of years. In Costa Rica, it turns out that plenty of easy-to-find familiar foods are actually just what the doctor ordered.

Here are 10 top medicinal foods and a list of herbs commonly found in Costa Rica. (Most information is taken from the book Medicinal Plants of Costa Rica by Ed Bernhardt.)

Pineapple: This nutritious, antibacterial tropical fruit contains bromelain, which is effective against certain throat and mouth infections. Pineapple is high in Vitamins A, B and C.

Papaya: The most common fruit in Costa Rica next to pineapple, papaya is effective at treating digestive problems – indigestion and constipation – as well as liver problems, as a diuretic for the kidneys, and to lower high blood pressure.

Coconut: Coconut palms are everywhere along Costa Rica’s beaches. People here drink the young coconut water, called “Pipa”, which helps revive you after too much sun, too much drink, being seasick, or when you are low on energy. Both the coconut meat and water are used for digestion problems, gastritis, ulcers and liver ailments.

Star Fruit: Called “carambola” in Costa Rica, Star Fruit hails from Malaysia and is a powerful antioxidant with lots of C and B-complex vitamins. The tart fruit is served as a natural juice in Costa Rica and as a garnish.

Ginger: Ginger has been used for centuries in India and Asia as a spice and medicine. Ginger is antibacterial and antiviral and can help prevent infections. Use it to treat colds and flu, sore throats, morning and motion sickness, and circulatory, digestive, kidney, and bladder problems. As a natural stimulant, ginger is a good substitute for coffee. Easiest way to use ginger is to boil it into a tea or cook with it as a spice. Sucking on a small piece of ginger will relieve a sore throat and help ease motion sickness.

Turmeric: Bright orange turmeric (in the ginger family) has been a staple in Ayurvedic medicine for roughly 6,000 years. It is an antioxidant and has been used to purify the blood, relieve stomach problems, indigestion, liver and gallbladder diseases, arthritis and rheumatism, and for colds and flu. Raw turmeric applied to the skin is effective in treating inflammations, infections, bruises and sprains.

Lemongrass: Originally from India, lemongrass grows prolifically in Costa Rica. Lemongrass tea (made by simply boiling fresh leaves) is used to treat colds and flu, gastrointestinal disorders, nervous conditions, pain and inflammation. Add ginger and honey to your tea to really knock out a cold.

Honey: One of the most well-known antibacterial foods in the world, honey has been used medicinally by many different cultures for centuries. Long before synthetic antibiotics were developed, honey was used as an antibacterial treatment for wounds and illness. Studies have documented honey’s effectiveness in treating cuts, burns, insect bites, yeast infections, various skin conditions, and fungal infections. Honey also is nature’s natural energy and immune system booster.

Chan: This strange seed drink is still served in many Costa Rican “sodas,” or local diners, though most people don’t know what it is. Native to Central America, the seeds of this roadside plant have been used to relieve indigestion, gastritis and constipation. The drink – made by mixing dry black Chan seeds in water with honey for sweetener – looks like a glass of milky frog’s eggs. However, Chan is very healthy … and it doesn’t taste like frog’s eggs!

Herbs: There are numerous beneficial herbs, which are a great way to flavor meals and prevent disease at the same time. Here is a list of herbs you can find easily in Costa Rica with antibacterial properties: