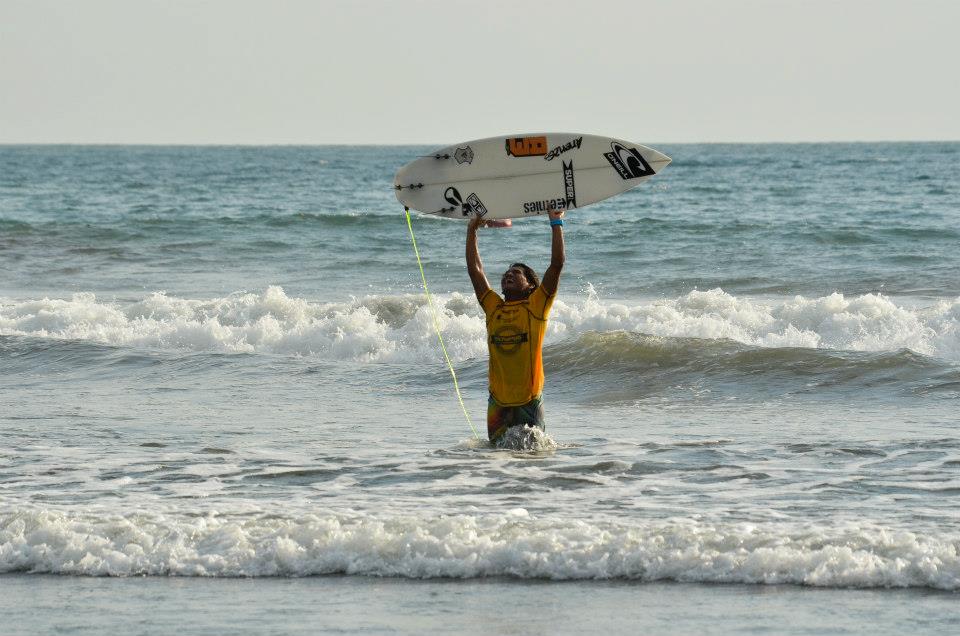 Costa Rica’s best surfers battled it out in two to four-foot waves in blazing summer sun in front of about 1,500 spectators over the weekend.

Jair Pérez beat out fellow surfers Luis Vindas of Jaco, Ramón Taliani of Santa Teresa and Josymar Fuentes of Liberia, to finish with a total of 13.27 points after running two waves in both directions. Taliani, who was a close second, put pressure on Pérez with one of the best air jumps seen at the competition. With this victory, Pérez enters a line-up of three different winners so far this 2013 season: Luis Vindas and 2012 National Surf Champion Gilbert Brown López. Pérez has won three medals so far in Jaco surfing competitions.

Nine-time Costa Rica surfing champion Lisbeth Vindas is on a quest for #10 this year. Vindas has won all three National Circuit competitions so far for 2013, making her a favorite for the National Champion title. In the MAUI Cup, Vindas beat out 2012 National Surfing Champion Nataly Bernold, Jill Kepich and Leilani McGonagle; although McGonagle took #1 in the Junior Women’s Division.

The next Olympus National Circuit Competition of the Costa Rica Surf Federation, the Quiksilver Cup, will be held at Playa Dominical on 23- 24 March 2013 in front of Hotel Tortilla Flats.

Learn to surf like a local with Del Mar Surf Camp!

With Del Mar Surf Camp, you will surf every day in warm water with locals who have surfed these waves their whole lives, plus learn to speak Spanish and enjoy area tours. Del Mar Surf Camp provides various packages for beginners/intermediate surfers, advanced surfers, women only, families and groups. Though there is a schedule, camp dates also are run on an “anytime you want” basis (discounts given for Saturday arrival).