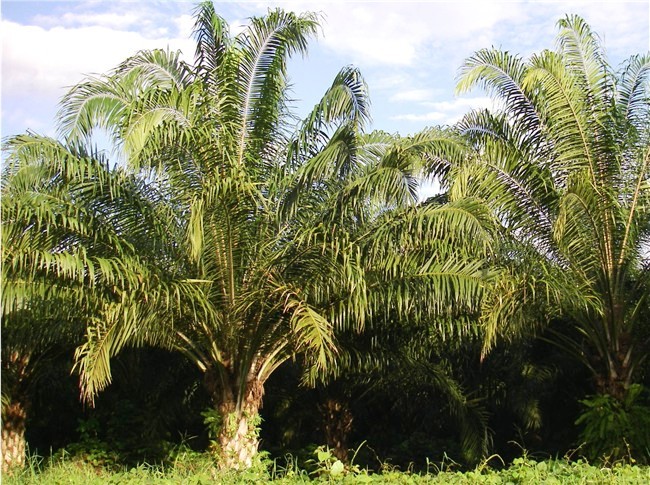 As you head south along the Pacific Coast of Costa Rica from Jaco down past Quepos/Manuel Antonio toward Dominical, vast forests of palm trees stretch for miles along the highway.

Lush and thickly planted, with emerald ferns growing on the trunks and a dense carpet of green underneath, the palms always remind me of a tropical enchanted forest.

These immense plantations are African Palms, and their oil production is one of the largest agricultural industries in Costa Rica. Palm oil – not to be confused with coconut oil – is the world’s most consumed vegetable oil. The oil extracted from palm oil kernels (called dates) is used around the world in products ranging from candy and cosmetics to candles, cooking oil, industrial lubricants and even biofuels.

Although it is planted on only 5% of the total world vegetable oil acreage, palm oil accounts for 33% of vegetable oil and 45% of edible oil worldwide, according to the scientific journal Nature. Grown widely in the tropics, oil palms have gained worldwide attention recently for the destruction of rainforest and wetlands to create plantations – especially in Malaysia, Sumatra and Borneo.

However, studies published last month in Nature by the Malaysian Palm Oil Board (MPOB) reveal that a targeted oil palm gene called “Shell” could boost oil production yields, thereby easing pressure on tropical rainforests by not needing to expand plantations.

The oil palm has an impressively long lineage, dating back to the origins of flowering plants (Arecaceae family) during the Cretaceous period about 140 to 200 million years ago, says the investigation. The oil palm genus Elaeis consists of two species – Elaeis guineensis originating from West Africa, and E. oleifera from Central and South America. The species from West Africa has a greater yield, but the species from the Americas has higher unsaturated fatty acid content, lower tree height, and better disease resistance.

African Palms can live for more than 200 years. They are pollinated by the wind, and in Costa Rica, the fruit is maintained and harvested all by hand. Workers cut the large fruit pods from the trees when they are a bright orange-red and full of kernels. In the palm-growing areas, you can see open-bed trailers full of palm fruit being pulled by a tractor or truck. Palm oil workers ride their bicycles along roads by the plantations balancing scythes on very long poles over their shoulders.

If scientists are able to manipulate this new Shell gene (responsible for whether the oil palm shell is thick or thin), research shows that it could result in a 30% higher yield of palm oil per fruit, and also produce shorter trees, making the palms easier to maintain and the fruit easier to cut, reports the Nature journal.

“Mutations in this gene … explain the single most important economic trait of the oil palm: how the thickness of its shell correlates to fruit size and oil yield,” stated Rajinder Singh of the MPOB’s Advanced Biotechnology and Breeding Center in the report. “This discovery may help balance the competing interests of meeting increasing world-wide demand for edible oil and biofuels on the one hand, and of rainforest conservation on the other.”

From Parrita to Dominical, along Costa Rica’s Central Pacific Coast, the economy is principally based on palm oil production. Long gone are the original Chiquita banana plantations, replaced in the 1940s and 1950s by African Palms in response to a blight of Panama banana disease.

Rent a luxury vacation home or tropical bungalow in the heart of Costa Rica’s African Palm oil plantations. Portasol Rainforest and Oceanview Living is an oasis of pristine rainforest in the midst of palm oil plantations, just 30 minutes from the famous beaches of Manuel Antonio and also Dominical. The long, less-traveled beach of Matapalo is a 5-minute drive away. The sustainable residential community has vacation rentals and properties for sale. Its 1,300 acres offer private trails in the jungle, rivers and waterfalls with natural pools, comfortable lodging, and spa services.