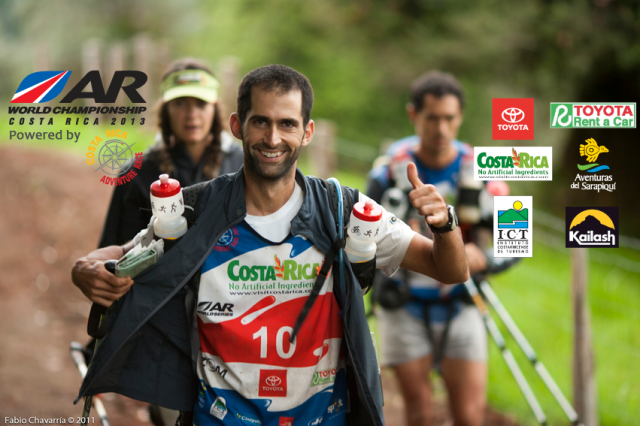 Imagine this Costa Rica vacation: Traverse the entire country from coast to coast and north to south, but only using mountain bikes, kayaks, rafts, zipline cables, and your feet. Sleep under the stars wherever you may be – mud, sand, grass field, rocky stream bed – but only for a few hours at a time. Brave the thrills of mosquitoes, venomous snakes, crocodiles, rain, boiling sun, and sweltering rainforest. Do that for about six days straight with three of your friends, but with the added adrenaline surge of trying to outrace 64 other groups like you all trying to get to the same final destination first.

Sound like fun? Maybe not for the average person, but if you are one of the world’s best endurance athletes, it’s right up your alley … or trail, as it were.

This unforgettable Costa Rica “vacation” is actually the 2013 Adventure Race World Championships (ARWC), happening in the country from Nov. 29 to Dec. 12. Sixty-five teams from 26 countries will compete for more or less 140 hours non-stop on adventure challenges, covering over 700 km from the Pacific Ocean to the Caribbean Sea and across Costa Rica border-to-border from Nicaragua to Panama. Teams of four competitors will raft, kayak (ocean and river), mountain bike, trek, climb and rappel, and cross canopy ziplines over a wide variety of terrain. Race organizers estimate that it will take the winning team approximately 120 hours in five to six days to finish. The race will be open a total of nine days (216 hours).

The epic adventure is the fourth Adventure Race Costa Rica (ARCR), which joined the Adventure Race World Series (ARWS) in 2010. The AR World Series is an international circuit of premier adventure races that since 2001 culminate every year in the AR World Championships. To get to the ARWC, teams have competed all year long in eight adventure races in different countries, leading up to the finals in Costa Rica.

Costa Rica is known for its beautiful beaches and rainforests, and is also gaining international fame for extreme sports. Hundreds of the world’s best mountain bikers and endurance racers recently crossed 192 miles (310 km) from Costa Rica’s Pacific Coast to the Caribbean in three days in the “La Ruta de los Conquistadores” (The Route of the Conquistadors) endurance mountain bike race. Held Oct. 24-26, the race just celebrated its 20th anniversary.

In June of this year, Hotel Hacienda Guachipelín, at the Rincón de la Vieja Volcano in Costa Rica’s northern Guanacaste region, hosted the international North Face Endurance Challenge. Competitors ran 80k, 50k, 21k and 10k races over rugged ground at the volcano. The eco-hotel then staged the 100-mile (160 km) Rincón de la Vieja Challenge mountain bike race in August. The adventure race was the first of its kind in Costa Rica and Latin America to circumnavigate an active volcano.