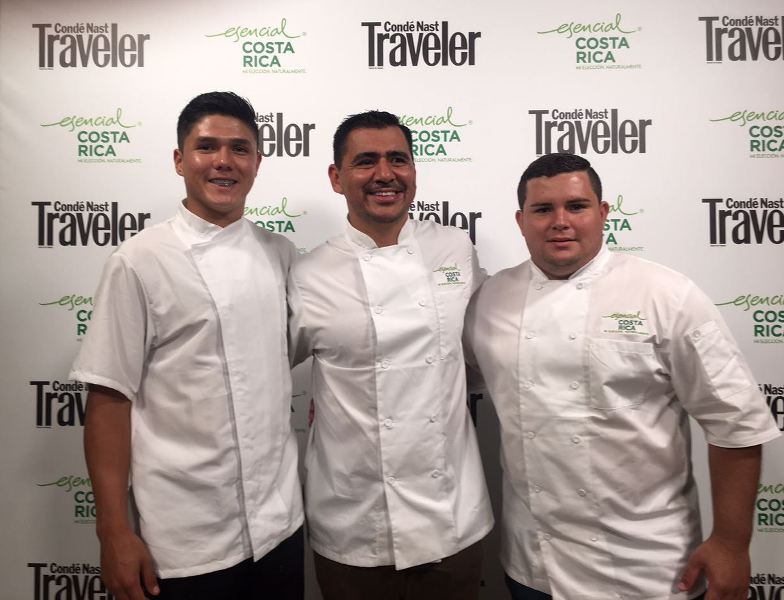 Most people when they travel like to bring home souvenirs. In the case of Chef Randy Siles Leandro, he tours the world to bring back “culinary keepsakes” to his domain at Tropico Latino Hotel in Santa Teresa, Costa Rica.

“What I do when I travel is to learn new techniques to apply with preparing meals here in Costa Rica,” he explained.

Visits to Barcelona and Galicia taught him new ways of preparing octopus. In France, he learned how to work with truffles and perfect the classic French recipe of crème brulee, which he makes in Costa Rica with blackberries and passion fruit. In Italy, Siles discovered the secrets of pasta, wines and cheeses, and said he ate the “best sandwich of his life” in a Florence market. The juicy pork sandwich is now inspiring a new pork dinner at Tropico Latino Hotel based on the flavors.

Siles toured Spain, France and Italy in September and part of October 2017. His grand European tour included cooking with celebrity chefs, media interviews, and a star-studded event by Condé Nast Magazine and the Costa Rican Tourism Board in honor of World Tourism Day. And it goes without saying that Siles enjoyed plenty of fine food and drink and heavenly culinary experiences.

His tour kicked off in style with an invitation by Chef Carlos Parra to cook dinner at Castillo de Maceda, a historic castle and hotel, and an important cultural site in Galicia. From there, Siles went to Barcelona to learn from 5-star Chef Arlin Posada about fresh products that he can also find and use in Costa Rica.

In Madrid, Siles showed off several of his Costa Rican specialty dishes before 45 of the most important tour operators in Madrid at a high-profile event hosted by Condé Nast Magazine and the Costa Rican Tourism Board to celebrate World Tourism Day. The feast was held in the design kitchens of The Art of Living by Frigicoll. Tropico Latino Hotel sous-chef Alejandro Jiménez and head waiter Esteban Lobo flew in especially for the event to assist their leader, Siles.

“To have three guys from Santa Teresa, from Tropico Latino Hotel, representing Costa Rica in front of one of the most prestigious magazines in the world (Condé Nast) is incredible!” enthused Siles.

Recipes such as ceviche, mango salad with fresh fish, tuna roll stuffed with guacamole, and cassava croquettes with tamarind chutney were well-received by the tour operators.

“The surprising flavors and ingredients transported them straight to Costa Rica’s beaches and rainforest. The Costa Rican delicacies have been a tasty way to expose the sustainable policies of a country that, being 0.3% of the surface of the planet, contains 5% of the world’s biodiversity and 3.5% of marine life,” wrote Condé Nast Traveler Spain.

After Spain, Siles journeyed to France to learn all about truffles, cheeses and wine. He visited Paris, Marseille, and Haut-Var in Provence. He soaked up the “black gold” culture of truffled cuisine with Chef Sébastien Gaillard at Restaurant La Truffe in Aups.

Siles hit it off so well with the native Argentinean chef that in 2018, four members of his kitchen staff from Tropico Latino Hotel will go to Restaurant La Truffe in France for a month to train with Chef Gaillard in sous vide cooking techniques.

From France, Siles was off to Italy to Rome and Tuscany, where he explored Florence, Montalcino, Montepulciano and other towns on a gastronomic tour of wine and cheeses for one week.

Now back at Tropico Latino Hotel in Santa Teresa, Siles says he is excited to present his new menu for the 2017-2018 tourism season featuring his creative blending of European culinary techniques with Costa Rican recipes. And he looks forward to more exploring and traveling in the New Year.